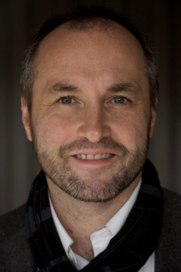 Colum McCann won the 2009 National Book Award in fiction for Let the Great World Spin. His new novel, TransAtlantic, will be published next month by Random House.

TransAtlantic opens with three stories of voyages to Ireland: Frederick Douglass in 1845, Jack Alcock and Teddy Brown in 1919, and George Mitchell in 1998. How did you decide on these three, and were there other voyages that you considered using and decided not to?

I suppose that writers must always gravitate towards their obsessions, and one of my obsessions was the idea that Frederick Douglass went to Ireland, a black slave, in 1845, but he was also an author, an orator, an intellectual, a dandy, an abolitionist, a humanitarian, a contrarian. What a story! I was also obsessed with the idea of writing about peace and what it could possibly mean in this day and age, which made George Mitchell a fascinating subject. Alcock and Brown landed in between these narratives, in more sense than one: they almost split the time difference between 1845 and 1998. But these were the only stories I contemplated. They seemed to bridge each other perfectly.  They are—in my imagination at least—braided together. They inform one another.

Give us a sense of how this novel came together, if you would. Where did you begin, and how did you shape the narrative to create the final version of the story?

It began with Douglass. It continued with Mitchell. But it was bridged by Alcock and Brown, which was the section that came easiest to me. But the moment I knew I "had" the novel was when I realised it was much more about the supposedly anonymous corners of human experience. The story belonged to the women. That's where the truth lay. It is, in a sense, a feminist novel.

The novel's real main characters, of course, are the women whose stories are at its heart: four generations of women beginning with Lily Duggan. Tell us a bit about them, and are they also based on real characters in part, or are they entirely fictional creations?

They are entirely fictional. And yet they live and breathe for me as much (if not more) than the supposedly "real" characters. It is very much a novel about women and their intersection with history; it's also a novel that hopefully forces a reader to confront what is "real" and what is not.

You must have done extensive research for this book: what were some of the sources you found particularly useful or compelling?

The further I go along in my career, the more I realise that books belong to others more than to myself. It feels to me that this book was a community effort and the grace of the book (if it has any grace) belongs to others. I am indebted to countless numbers of people. I am aware that this could sound coy, or full with false humility but the fact of the matter is that a writer gets his or her voice from the voices of others. We are indebted to those who have come before us.

In the acknowledgements you mention that George and Heather Mitchell "had the great grace to allow me to try to imagine my way into their world." I'd love to know more about what you learned from Senator Mitchell and how you worked those details into the story.

George and Heather Mitchell are an amazing couple, an astounding story of love and resilience and decency. They allowed me, at first, to imagine their lives. Then they read the manuscript and were charming enough, and humble enough, to allow me any mistakes. So I wrote the section before I met Senator Mitchell, and then I shaped it to get as close to the truth as I thought I might possibly get. They helped me realise what it was that I wanted to eventually say.

What's your favorite scene or line from TransAtlantic?

Oh, this is very much a "slice the baby" question. How can one choose? I suppose the last line is very important to me, though I very much like line 247 and line 822 (just kidding!). I am very proud of the Douglass section—that one broke my heart until I felt like I had properly captured him. But this is an impossible question and I'm delighted by its impossibility.

When and where do you do most of your own writing? Are there any particular writing habits or practices that you've found useful?

I write in a closet. I'm not kidding. I have designed my office so that I actually sit in an old closet. The best writing tip I have is that you must write. I don't mean this to sound trite. You must have stamina and perseverance. You must learn how to fail. My good friend Aleksandar Hemon says: "it is all shit until it isn't." There's a funny but spectacular wisdom there. You must persevere. You must write through the mire. You only succeed when you embrace your own failure.

What are some of your all-time favorite authors or books? Are there any you find yourself returning to often?

Oh! If I listed them I am afraid that I would leave someone out. So let me only pay reference to the dead. I look forward some day to say thank you to the great Irish writer, Benedict Kiely, who was not only a mentor but a family friend. I imagine he might be tucked in the corner of purgatory happily chatting with James Joyce about the idea of infinite possibility. Riverrun, Riverrun …

Two of my students recently published books—Bill Cheng and Jessica Soffer. They both have immense careers ahead of them. And something I found electric was Rachel Kushner's The Flamethrowers. And Mark Slouka's new book, Brewster. And Andy Sean Greer's new book, The Impossible Lives of Greta Wells. And I must say that I adore Claire Messud's new book The Woman Upstairs. But here I go … and I could go on endlessly. I try to read as much as I can. And yet what frightens me is that I might miss out on something good …

I think it's fair to say many of us know that feeling! Thanks so much!