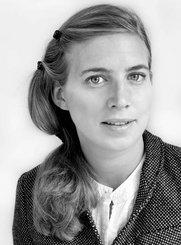 Jennifer McVeigh studied English literature at Oxford and has worked in the film, television and radio industries. Her debut novel, The Fever Tree, was published by Amy Einhorn Books in April.

Give us, if you would, The Fever Tree in a nutshell, for those who haven't yet had a chance to read it.

The Fever Tree is a novel about a woman who is forced to leave behind everything she has ever known, and emigrate to South Africa to marry a man she barely knows. It's a novel about a country in the making, about diamonds and disease, love and redemption.

What part of the novel came to you first?

My husband and I were driving across the hot, dusty plains of Namibia in Southern Africa, when we passed a high wire fence cordoning off a diamond mine. I remember thinking—who were the men who first came here to mine for diamonds? What kind of lives did they lead, without running water or sanitation? And who were the women who came with them? When I came back to England I did some research, and became fascinated with the early days of the diamond rush in South Africa, when men travelled hundreds of miles to the diamond fields with little more than the shirts on their backs, and when fortunes could be won and lost on the luck of uncovering a stone.

Is there a specific scene from the story of which you're particularly fond?

Frances—the lead character—is a girl who has always hidden from the truth. When she is forced to confront it—in a dramatic scene towards the end of the novel—the result is catastrophic, both emotionally and literally. This is the scene I held in my mind as I wrote the book, and it propelled the story towards its conclusion.

What were some of the historical sources you found most interesting and useful as you wrote "The Fever Tree"?

I drew on a huge range of historical sources. The British Library was particularly useful, and it was there that I poured over guide books to South Africa, written in the 1880s, read Victorian newspapers published on the diamond fields, and discovered the diary which told the story of a smallpox epidemic which raged on the diamond mines—the true story which lies at the heart of the book. But there were other sources. It was in Kimberley, the famous diamond mining town, that I came across a book of old photographs taken on the diamond mines, which made real for me the lives of the men, women and children who camped in tents, in the dust and the filth, on the diamond fields, hoping to make their fortune.

How did your own experiences traveling in southern Africa come into play as you wrote the novel?

When I travelled in South Africa, I was fascinated and unsettled by its dark concoction of pioneer spirit and racism, by the brutality of its urban landscapes—with their sprawling townships which spoke of labour migration and forced evictions—and the astounding beauty and wildness of its countryside. These contradictions, I realised, had their roots in my story—in the discovery of diamonds, when men like Cecil Rhodes, driven by greed, used their political influence to create an economy based on lines of race. The more I learned, the more I was able to make sense of what I had seen in South Africa, and the people and attitudes that confronted me.

Once the research is out of the way, most of the actual writing is done at home. At my desk, in bed, standing by the toaster. Anywhere where I can catch myself off guard and get words down on paper.

Which authors and books do you find yourself returning to most often, and why?

Anyone who has the ability to combine compulsive storytelling with a subtle use of language. Ian McEwan, Hilary Mantel and Michael Ondaatje all have a touch of genius, and reading their work is a masterclass in writing fiction.

What's your library like? What sorts of books would we find on your shelves?

My bookshelves are overflowing, crammed with an eclectic mix of novels and research materials. There is everything from Jack London to Jilly Cooper; from Samuel Richardson to Jane Austen; from 19th-century political pamphlets to a history of the Victorian underworld. There are novels which had me gripped late into the night, and others which I have admired for their sparsity. Space is at a premium, and every book has to earn its place—I rarely keep anything I haven't enjoyed.

Two novels written by women, both set on the Riviera but at very different times. The first is The House of Mirth. Edith Wharton is breathtakingly brilliant, and it was such a treat to discover this book so late. The second is Swimming Home by Deborah Levy—a small book with huge scope, and for me that rare thing—a perfect read.