David Mitchell—award-winning author of Man Booker Prize shortlist nominees Cloud Atlas and Number9Dream—is known for his complex narratives, spanning decades of time and generations of characters, frequently with a hint of the paranormal. Mitchell holds an M.A. in Comparative literature from the University of Kent. In addition to his own novels, he also translated the memoirThe Reason I Jump into English from the original Japanese.

Slade House is Mitchell's seventh novel (out October 27th, from Random House), and is our pick for November's One LibraryThing, One Book group read (starting November 9th). On the heels of last year's The Bone Clocks, Mitchell's latest is a sharp riff on the haunted house story, with its own rules and surprises.

David was kind enough to chat with LibraryThing staffer Loranne about haunted houses, Twitter, and his latest work.

Slade House fits within the broader world you created in The Bone Clocks, while also being a self-contained haunted house story. What spooky tales are personal favorites/did you draw on for your inspiration?

The Monkey's Paw by W.W. Jacobs sets the gold standard, for me. Lordy lordy it's good. Stylistically polished, philosophically attentive and with its cosmology and present time-line in perfect balance, it's no accident that this English short story from 1902 appears in so many anthologies of the supernatural. Poe casts a long shadow from an earlier era, but you read him more for sound, colour and flavour than to be outwitted; ditto H.P. Lovecraft.

For the longest successful single-narrative haunted house story that doesn't develop into horror, I’d go back to Henry James' The Turn of the Screw, which is both a flawless novella and an exploration of the genre: are the ghosts parapsychological or psychiatric in origin? M.R. James' dreamlike stories beguile more than they frighten a modern readership, but stories like his often-anthologised "Oh, Whistle, and I'll Come To You My Lad" persist in the memory for decades. Shirley Jackson's The Haunting of Hill House prefigures an evolutionary jump in the 1970s with cinematic American novels by Stephen King and his generation. King often confounds the Ghosts + Gore = Horror equation, and I don’t see how it's possible not to be influenced by The Shining, once you’ve read it. (Kubrick's film is justly famous, but differs from King's fine novel in several key points.)

The last influence I’ll refer to here is an American book whose title and author I’ve forgotten: it was one of those Choose Your Own Adventure books from the early 1980s which my local library in Malvern stocked—they were hugely popular, and the resourceful librarian had to reinforce the spines and covers with adhesive clear plastic. The book I'm thinking of was set in a witch's house, and one of its plot-lines ended up with you dropping a tea-pot and smashing it on the floor. You said, "I'm sorry, I'll pay for it," and the witch replied, "Oh but you will": and no matter how many fragments of porcelain you picked up, you could never finish—nor could never stop bending down to pick up more. Sisyphean and dark or what?!

Interviewer's note: I was a huge Choose Your Own Adventure fan as a kid myself, and now I'm dying to know which one this is! Any LibraryThingers out there have a guess?

I think part of why the haunted house story resonates so well is that many of us recall a strange house that others automatically avoided (for reasons supernatural or not) from our childhoods. Is there a "haunted house" that you remember from when you were growing up?

Cool question. There's a totemic quality about childhood, meaning that pre-adulthood endows you with an ability to award sentience to inanimate objects. That stain on the wall is a melting face; that swirl of grain and knots in the pine wardrobe is a Cyclops bent over in laughter; those creaks in the nooks and crannies of the night are—obviously—the footsteps of the orc made out of chewing gum you were dreaming about just now. My point is that kids experience every house as potentially haunted, even the small post-war, cookie-cutter mass-constructed houses that me and pretty much everyone I knew in my childhood lived in.

Since you ask for one specific house, though, I'll offer up a bungalow owned by one of my mum's friends on the English coastal town of Bognor Regis. Mum took me on a visit there around 1980, when I was eleven. The trip wasn’t a great idea. My mum's friend's malign mother also lived in the bungalow and she disliked children. Also resident was a grandfather clock, and in my perception, it and the old woman were somehow one and the same. The clock watched the long hallway and its rhythmic 'thunk-click, thunk-click, thunk-click' was like a wood-and-bronze cardio-pulmonary system. One morning I stopped the pendulum with my hand. The silence was thunderous and I grew scared that I'd killed the clock. I tried to set the pendulum swinging again, but instead of a calm and even rhythm like before, the pendulum swung irregularly and drunkenly, and any further remedial measures just made things worse. In fiction, of course, I'd then discover the corpse of the unpleasant old woman: in reality, I did what any honest and conscientious Sunday School boy would do: flee the scene of the crime and deny all knowledge. Three times, before the cock crowed. 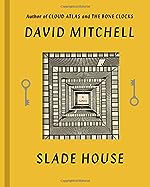 The structure of Slade House is similar to that of The Bone Clocks: each section follows the perspective a different character than the one before, skipping ahead at nine-year intervals. What was your favorite section or scene to write and why?

I like Nathan in 1979 because in it I'm setting up the story and because the boy is such a square peg in a round hole. I like Gordon the cop in 1988 because Nathan set up expectations which I can now confound. I like Sally in 1997 because of her insecurities and the fast succession of house party scenes allows me to (try to) get a bit David Lynch-esque. I like Freya in 2006 because through her I can explore the origin stories of Slade House. I like the fifth and final section, because I get to occupy the body of the novel's antagonist, and it’s always fulfilling to endow characters with the requisite three dimensions. So really, I liked writing all of the sections: if you're not enjoying it, it's usually because you've taken a wrong turn, so you need to backtrack and work out how to fix it. Then you enjoy it again.

You’ve explored Twitter as a storytelling medium more than most—Slade House having evolved out of The Right Sort, and now with the companion piece of @I_Bombadil. What's it like writing a story for Twitter vs. working on a novel?

Working on a novel is like describing a landscape over which you are floating in a slow-drifting balloon, with powerful binoculars, on a bright afternoon with perfect weather conditions. Working on Twitter fiction is like describing a landscape of tunnels and gorges you are glimpsing through the fogged-up window of a bullet-train. Twitter fiction also demands short names: have a name as long as 'Benedict Cumberbatch' and you may as well knock off early and go home.

Having come to the realization that you’ve embarked on an a level of world-building across your novels (that you’ve likened to creating "[your] own Middle Earth," how does that affect how you approach your ideas about future writing projects?

Not so much, to be honest. I still write whatever books insist most vigorously that they be written next. Sometimes I leave doors in the book I'm working on unlocked so they'll be easier to open from the other side. But my first principle of world-building remains non-negotiable: every book I write must work as a standalone novel for an unknown reader who has never read, nor will ever read, anything else I have written or will ever write.

As a big fan of your work, I’ve noticed that you have a knack for writing characters who I enjoy disliking—Hugo Lamb, Crispin Hershey (both of The Bone Clocks), and Quasar (Ghostwritten) come to mind. They're incredibly well-written, but also incredibly unpleasant as people. Slade House is no exception. How do you feel about your characters? Are there some you feel more connected to, or enjoy writing, more than others?

Thanks for reading me. As for the reader, so for the writer: we don't have to like the people—we just have to believe they're real. For the characters to feel real, I have to be connected to them—to know them, their likes and dislikes, their fears and desires, their language and their world-views. That said, I suppose I feel a certain pleasure in writing people who say and do things I am too mannerly and too afraid of the consequences to say and do myself. You can guess who they are. That said, even the ethically-twistier characters must be self-redeemable: unremittingly unpleasant human beings grow tedious after 40 or 50 pages and tend to kill fiction as surely as they kill social events.

When and where do you like to do most of your writing?

When my kids, my wife and other commitments can spare me; at night; at my main house on a hill in West Cork, Ireland; at another tiny (and unhaunted) house we own in town. I'm here right now, trying to get this done before 2pm when I have to go and pick up my son from school. I'm full of lunch. The sun's streaming in. I don't want to move.

What books would people be surprised to know you own?

The answer rather depends on how surprise-able the person in question is, and how well they know me. For now, I nominate a calf-skin bound King James Bible that my mum gave me for pre-Internet era research when I lived in Japan. I exercise my right not to be religious, but this bible is a monument to language and human endeavour and it connects me with earlier, starker centuries.

I read Andy Weir’s The Martian which I gulped down on a flight to Chicago. Mighty! The stewardess was a big reader asked if it was any good, so after I finished I gave her my copy. To counterbalance such a popular choice, I'll give a mention to an obscure early twentieth novel by one of Japan's most likeable writers, Natsume Soseki called The Miner. It's a proto-modernist novel translated by Murakami's translator Jay Rubin and is as ambulatory as The Martian is adrenaline-fuelled. There are many rooms in the mansion of the novel. Amen.

What can you tell us about your upcoming projects? What’s next for you?

I'm doing a couple of non-novel side-projects to 'omnivorize' myself a little, but I’ve promised not to discuss these for the time being. My next novel will be set in Soho London, Greenwich Village and Laurel Canyon in the late 1960s and will contain not a whiff of the supernatural. Probably.