Mallory Ortberg has written for Gawker, New York Magazine, The Hairpin, and The Atlantic. She is also—along with partner in crime/editing Nicole Cliffe—the co-creator of The Toast, a general-interest website geared toward women. Since its debut in July 2013, The Toast has developed quite a cult following.

Mallory's first book, Texts from Jane Eyre: And Other Conversations with Your Favorite Literary Characters (out November 4, 2014) is the next step in the popular Texts From series featured on The Toast. It is also a riot.

Loranne caught up with Mallory this month to talk about her work.

Your book is essentially what it says on the tin, but, in case anyone is unclear on the subject, could you tell the audience at home what Texts from Jane Eyre is all about, in a nutshell?

Sure. It is... it is slightly less gimmicky than it sounds, I think, because it's really very specific jokes about very specific literary characters. The premise, you know, is pretty much "WHAT IF CELL PHONES BUT THE PAST," but the phones aren't really the point, the point is all the horrifically selfish behavior exhibited by some of our favorite protagonists throughout the Western canon. It's jokes about books.

As someone who is hailed as the Queen of the Internet (or at least a very specific subset of the Internet) right now, why did you decide to turn Texts from Jane Eyre into a book? Was there a particular story or character the served as a jumping-off point?

Oh gosh, to be quite honest, I decided to turn it into a book because someone offered me money to do it. I mean, I don't think the offer would have been made if the series didn't seem viable, but basically someone said "I think this would make a good book and here is some money to prove it," and I said "Thank you," and wrote enough words to earn that money. Otherwise I'd probably just have kept on doing it for free on the internet, like a chump.

It started as just Texts From Scarlett O'Hara, but then I found myself thinking about so many other literary characters, and I didn't want to stop. By Little Women, I think, I'd realized that this was something a lot of people were having fun with, not just me, and that it was the sort of thing that could go on for a long time.

You can see Mallory talk more about the beginnings of the Texts From series—and her inspiration for the book—here. 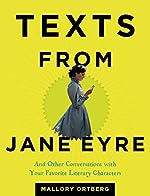 You seem to have a deep and abiding love for the source materials in a lot of Texts from Jane Eyre. Who were your favorite and/or least favorite characters to write text sessions for?

I DO. Oh, Lord, do I ever. I have no unfavorites in the book, any unfavorites were speedily culled from earlier drafts, but I think Jo March and Mr. Rochester have to rank pretty high. Maybe William Blake. The really creepy ones, who yell a lot, they're quite dear to my heart.

See Mallory talk about Emily Dickinson and her other favorite characters to write about here.

Were there any planned characters or authors you wanted to include in this book that just didn’t work out?

Yes, but I don't remember many of them. It was pretty clear, pretty quickly, what concepts weren't going to work, and we ditched them early on. I think Faulkner fell by the wayside, as did Dante. I couldn't always find the right hook for the characters.

In the process of writing Texts from Jane Eyre, did you go back and re-read any of the classics you used for inspiration?

I did! It was enormously fun.

I’m a huge fan of your work on The Toast, and—please don’t take this the wrong way—while Texts from Jane Eyre has its distinctly weird moments (William Blake is a personal favorite), it isn’t quite so out of nowhere as some of your other work. Where do pieces like "Erotica Written by an Alien Pretending Not to Be Horrified by the Human Body" come from?

THE ALIEN IS ME. Oh man, the alien is me. I find the entire world to be out of nowhere, and horrifying, and creepy as all hell. I mean, everything in that piece is true, you know? We use our mouths for breathing AND eating AND intimacy? Sometimes for more than one of those functions at the same time? We act like it's normal because we're used to it, but good Lord, that's just bad planning. We put bits of ourselves into other people for prolonged periods of time, and that's what sex is! It's great, you know, and it's perfectly normal, but if you stop to think about it for more than a few minutes, it can really throw you for a loop.

We’re big fans of Dad Magazine here at LibraryThing. Will there ever be a Mom Magazine?

Someone pitch me Mom magazine! I would read that pitch happily. Most of our mom coverage tends to be a bit more serious, and I would welcome more Mom Jokes on the Toast.

How would you explain The Toast to someone who doesn’t really do the Internet?

Oh, Lord, I'm not quite sure. It is... a blog (do I have to explain to them what a blog is?) that has lots of jokes about literature and history and pop culture and various other subjects.

What’s the best thing about working for a website that you (and the also-fabulous Nicole Cliffe) built yourself?

Everything. Dude, everything. Name a thing, and it is the best.

This isn't a very new book, but I just discovered Caucasia by Danzy Senna this year and I thought it was marvelous. And I quite liked We Need New Names from NoViolet Bulawayo. I'm about to read Barbara Pym for the first time—I don't know how I missed her, but I did—and I have every intention of enjoying her work thoroughly.

Couch or bed! I have a perfectly good desk and kitchen table and I never write at either of them.

What’s your home library like? What kinds of books would we find there?

Cluttered, a bit. I have a few proper bookcases, and my bed has a built-in bookshelf wall, which is where I keep my favorite books, the ones I like to reread before bed (Andrew Lang, P.G. Wodehouse, Chesterton, T.H. White, Forster, Ivanhoe, that sort of thing). Art books go on the desk, because they're usually too tall for the shelves. New books go on the kitchen table. A few by the shower, because I like to read in the shower, because showering is unutterably boring.

Can you tell us about any other projects you have in the works? What’s up next for you?

I have no new projects in the works! I will tour a bit to promote the book, which will be very fun, and then I will go back to work at The Toast.