Andy Weir has spent the bulk of his career up to this point as a software engineer. The success of his 2013 debut novel, The Martian has been the result of a remarkable journey, and is very much deserved. It's little wonder that the author identifies as a long-time space nerd.

Tim caught up with Andy this month to talk science, space, writing, and more science!

Tell us what your novel is all about.

It's about an astronaut who gets stranded on Mars (the rest of his crew thought he was dead). Now he has to survive with the equipment he has on-hand.

The Martian has both a great narrative and an engrossing focus on scientific and practical specificities. What drove what?

Definitely the science drove the plot. The problems he faced were real issues someone in that situation would face, and his solutions had to solve them. So those problems, and their solutions, are what moved the plot along.

The science is real, right?

As best as I could make it, yes. I put a lot of effort into scientific accuracy. I did a ton of research and math to work everything out. I'm sure I made some mistakes, but for the most part, the science is solid.

I gather you even wrote an orbital mechanics program to figure out certain details in the novel. I have to ask, are you insane?

Haha, maybe. But I wanted everything to fit right. So I wanted to know how long it would take to get there with a constantly accelerating ship and what path they'd take.

As I said, before, it's a page turner. Did you have any models for the narrative?

I didn't really have any model, per se. The story is very linear. Each problem needs a solution, and usually the solution causes the next problem. All I had to do was have Mark narrate the situation with a smart-ass tone of voice.

The Martian had an unusual path to publication—free, then self-published and finally picked up by a major publisher. What does that tell us about your book, or about publishing in general?

It's pretty cool. It means any schmoe can break into the writing world on their own. Self-publishing an electronic edition of your book costs you nothing, and if people like it, you'll do well. 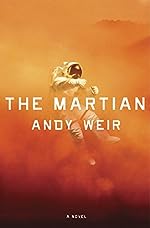 What books were inspiring or helpful for you in writing The Martian?

After reading The Martian, I wanted to read more space-travel narratives, both real and imaginary. Do you have any recommendations?

Packing for Mars by Mary Roach is pretty cool. Though it's not a narrative; more of a documentary.

When I was a kid in the 70s, the future of space exploration seemed bright. It is now almost certain that everyone who walked on the moon will be dead before anyone walks on Mars, or even the moon again. My son is eight. Do you think someone will walk on Mars in his lifetime?

Difficult to tell. It's hard to justify sending humans to Mars now that we can make advanced robots like Curiosity. Not only would a manned mission be orders of magnitude more expensive, it would risk human life. In the days of Apollo, we simply didn't have the technology to make rovers that could do what the astronauts did. Nowadays we can.

Though I do think there's an excellent chance your son will get to see a manned Moon landing in his lifetime. If not by the US, then by China.

The Martian has apparently been optioned for a film. What is the one thing you hope they get right?

I hope they don't make Watney into a serious brooding character. His personality is a large part of the story.

I gather your day job is as a software engineer—mine too. I can't help but ask, what sort of work do you do?

Well I recently quit my day job to go full time on writing. But when I was programming, it was mobile device management software. Basically it's software you can install on your phone that will set up your email, wifi, certs, etc. on your phone for you.

Programmer-writers are pretty rare. How do the two relate for you?

Mostly in the math and science arena, I guess. I'm sure my obsession with (probably unimportant) details comes from my software engineering background.

At LibraryThing we always ask about people's personal libraries. What can you tell us about yours?

I'm terrible. I don't read nearly as much as I should. My main love is TV and movies.

Are you working on another book now?

Yes. I'm working on my next novel, tentatively called “Zhek”. It'll be a while before it comes out. Next year at least.