The Chapel of the Abyss 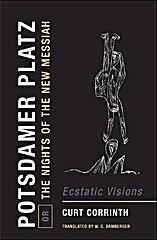 Blessèd be thine hands, for they are unclean!
At every joint lie secret sins unseen,
Their white nails beneath the lamp
Evoke hosts stolen beneath the white shadow of the lamp,
And upon thy finger, the captive opal’s gloss
Is the last sigh of Jesus on the cross.

The Chapel of the Abyss is a virtual reliquary, a cenotaph devoted to the extravagant saints and angels who have fallen out of fashion and elsewhere. The kernel of this group is in the decadent and occult-themed literature of the 1890s and early 20th century. The focus, along with the theme, will continue to expand or metastasize as the mysteries of decay, of sickness, and of the wound, and their link to an original sin, perhaps one of omission, but nevertheless mortal and without appeal, are enduring and may be pursued at any point in time.

"And perhaps it was not perceptible to him in the midst of his tumultuous agitation, how much higher than all the voices of nature resounded here with a dissonant clamour the glaring disappropriation of all things - of the altar all the more majestic for being abandoned, of the useless lance, of the tomb as perturbing as a cenotaph, of the clock ticking for nothing outside of time, on which its gears had no more grip than a mill-wheel in a dried-up stream, of the lamp burning in full daylight, of the windows palpably made to be looked into from outside...."

"Such is the nature of this place.... Horror and ecstasy abide here together."

"This life is a hospital where every patient is possessed with the desire to change beds; one man would like to suffer in front of the stove, and another believes that he would recover his health beside the window. It always seems to me that I should feel well in the place where I am not, and this question of removal is one which I discuss incessantly with my soul."

"It is always Autumn at Bruges.... The sameness of this terribly constant old city seems to intensify the change that has come to oneself."

In his classic novel of the occult, Là-Bas, Joris Huysmans wrote “Now from lofty Mysticism to base Satanism there is but one step. In the Beyond all things touch.” Essence becomes the surface of things: the priesthood of art and the cult of the senses. By piety or perversion- through prayer, or by "the rational derangement of all the senses" -one must obtain to the Beyond.

The decadent is concerned with the mysteries of the artificial, the urban, masks, the passion play of the self. The city is the pool of Narcissus, a black mirror in which to scry one’s own voluptuous postures of decay.

"Let us dream of evanescence, and linger in the beautiful foolishness of things."

Over-refined, faithless and morbidly self-observant, the decadent is a mystic guided by "desire without light, curiosity without wisdom, seeking God by strange ways, by ways traced by the hands of men; offering rash incense upon the high places to an unknown God, who is the God of darkness." (Ernest Hello)

"The decadence is fundamentally a literature of deep religious concern."

One can keep to the well-worn way and aver that the kingdom of heaven is at hand, but entry demands devious routes. Christ thus advised the elect: go against nature, "Love one another as you love yourself."

For less hardy souls, sensual indulgence and depravity serve as stations of the cross. Severin’s journey into the dark and Durtal’s return to the Church indicate that the underlying theme is pilgrimage, quest (the dead end?)- if not for spiritual transcendence, then for moral transformation - for a new order of existence: to undertake oneself, "to create one's own aesthetic." The fate of Narcissus is henosis.

"I do not like inaccessible grandeur in mountains, nor in persons, nor in nature. I prefer, in all things, an honest moderation. Should one aspire to the ... sublime... one should at least go about it with discretion!"

"We hate the Crowd, the Law, the World."

“I like the word ‘decadent,’ all shimmering with purple and gold … it throws out the brilliance of flames and the gleam of precious stones. It is made up of carnal spirit and unhappy flesh and of all the violent splendors of the Lower Empire; it conjures up the paint of the courtesans, the sports of the circus, the breath of the tamers of animals, the bounding of wild beasts, the collapse among the flames of races exhausted by the power of feeling, to the invading sound of enemy trumpets. The decadence is Sardanapalus lighting the fire in the midst of his women, it is Seneca declaiming poetry as he opens his veins, it is Petronius masking his agony with flowers.”

"The eternal retribution of God exists. And everything that lives is flogged to death for its secret sin, committed in the darkness of eternity. Blessed is the one who breathes his last after the first few blows."