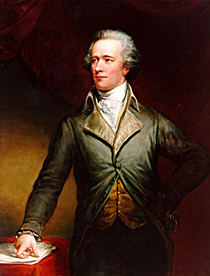 Titles from Columbia's collection not included in that main gift, and other titles not at Columbia, are so noted in Comments. These are mostly those titles gleaned from a thorough examination of The Papers of Alexander Hamilton, edited by Harold Syrett et al. (Columbia University Press, 1961-1987) and a list included in The Law Practice of Alexander Hamilton, edited by Julius Goebel, Jr. (Columbia University Press, 1964), I:849-867. The most complete list of AH's library is a list of 10 "deficient books" sought by AH in a letter to Richard Varick, 16 June 1795. See LPAH I:851-852.

Note on serials: the collection as given to Columbia includes a number of individual serial publications (usually single issues) which contain articles relating to Hamilton's life and career. These single issues (probably gathered by descendants) are not included in this catalog, but several runs of periodicals which are likely to have been in Hamilton's collection are included.

In his book Origins of Legislative Sovereignty and the Legislative State: Volume Six (American Tradition and Innovation with Contemporary Import and Foreground) (Westport, CT: Praeger, 2004), pp. 213-216 (notes pp. 395-397) A. London Fell examines Hamilton's library in general, and notes the troublesome nature of the Columbia collection: "The Columbia books with imprints prior to [AH's] death date in 1804 cannot be assumed to have belonged to him, although they may well have." He concludes, though (n. 57, p. 397), that because other Hamilton books did not make their way to the Library of Congress (which holds many of his papers) it is "all the more likely that the unique Columbia collection of Hamilton books does indeed include the vast bulk of what survives from Alexander's own collection as passed on to his family." Fell adds that Hamilton "undoubtedly had a substantial collection of legal and related books that have not survived either at Columbia or at the Library of Congress."

In the introductory note to the list of law books in The Legal Papers of Alexander Hamilton I:849, the editors note that a list of at least the legal titles may have existed at one time, but if so, it has been lost. Some of AH's books are believed to have been donated to the Irving Library Association in the 1870s, but this organization has not been identified with certainty.

AlexanderHamiltonI hat hinzugefügt:
The American negotiator; or, The various currencies of the British colonies in America; as well as the islands, as the continent. The currencies of Nova Scotia, Canada, New England, New York ... and of the islands of Barbados, Jamaica, St. Christophers ... reduced into English money, by a series of tables, suited to the several exchanges between the colonies and Britain ... With tables reducing the current money of the kingdom of Ireland into sterling, and the contrary ... von John Wright

AlexanderHamiltonI hat hinzugefügt:
The reports of Sir Henry Yelverton ... of divers special cases in the court of King's Bench, as well in the latter end of the reign of Q. Elizabeth, as in the first ten years of K. James. ... Publish'd originally in French by Sir William Wylde, ... Now carefully translated, von Henry Yelverton

AlexanderHamiltonI hat hinzugefügt:
A general abridgment of law and equity alphabetical digested under proper titles with notes and references to the whole von Charles Viner