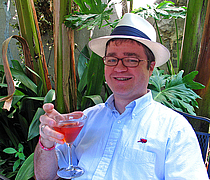 Über michI'm the author of the long-running website The Gumbo Pages (which includes The Creole and Cajun Recipe Page and the weblog Looka!, both of which have sort of a life of their own), and a native of New Orleans, Louisiana.

I'm the compiler/producer of the 4-CD box set "Doctors, Professors, Kings & Queens: The Big Ol' Box of New Orleans." I wrote the long music essay in the 85-page accompanying book (my friend Mary Herczog wrote the travel essay), and provided a couple dozen photographs for it as well.

From May 1998-September 2008 I was the host and music programmer of a weekly radio show called "Down Home," Thursdays from 7-9pm Pacific time on KCSN 88.5 FM in Los Angeles and on the web at kcsn.org. I played tons of New Orleans music, Cajun music and zydeco, Irish music plus blues, roots rock and all kinds of eclectic roots music. Before that I did a similar series of shows on KCRW 89.9 FM in Los Angeles from 1988-1998. I'm currently taking a break from radio after 20 years, and enjoying the time off.

I'm a foodie, a reasonably accomplished non-professional mixologist (still learning, so much, every day) and a photographer, all more or less in advanced amateur mode although I've made brief forays into getting paid for this stuff too. Some of my food and cocktail recipes have been published in the San Francisco Chronicle, the New Orleans Times-Picayune and several other newspapers, in Gary Regan's The Joy of Mixology and Robert Hess' The Essential Bartender's Guide, and have appeared on menus at the Zig Zag Café in Seattle, Arnaud's French 75 Bar in New Orleans and Eastern Standard in Boston. I'm a member of the Los Angeles chapter of the United States Bartenders Guild, and I'm also on the board of advisors of The Museum of the American Cocktail, but I mostly take advice from them rather than give it.

I'm dedicated to the elevation of the standard of bartending as a craft, and I believe that we as a people must stop accepting poorly made cocktails, any more than we'd accept bad food coming from a top restaurant kitchen. (We should also stop being so rude, mean and rotten to each other, while we're at it. Hey, can I buy you a drink?)

Everything tastes better when wrapped in bacon.

Über meine BibliothekI like fiction (especially science fiction), history, fine art photography, Irish culture and music and fiction, food writing, cookbooks and books on cocktails -- we have a nice collection of fairly rare cocktail-related books, the oldest of which is William Schmidt's "The Flowing Bowl," published in 1892. I've also got tons of books on my native New Orleans and its history.