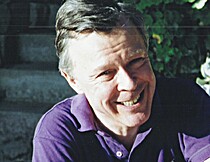 Über michFor 25 years I practiced international corporate law in New York City, Paris, Saudi Arabia and Cincinnati. Part of my practice involved refugees from the Middle East, Yugoslavia and the Soviet Union who were seeking asylum in the United States. Although these refugees were sometimes fleeing war, imprisonment, torture, or even death, it was tremendously difficult to obtain asylum for them. In one case, in particular, by winning an asylum case, I knew that I had helped to save the life of the refugee.

These refugees also changed my life. I decided to take early retirement in order to write a book, inspired by their stories. My novel "A Thousand Veils" is the result. It is the fictional account of a courageous Iraqi journalist and poet who risks her life to expose the truth about the Hussein regime in the hope that her daughter will be able to grow up in a freer society.

"A Thousand Veils" won the 2009 Colorado Authors League's award for mainstream fiction and was a finalist for the Colorado Book Award, sponsored by Colorado Humanities. It received a gold star from TeensReadToo and is in their Hall of Fame.

I am contributing ten percent of my net royalties on "A Thousand Veils" to the United Nations High Commission on Refugees.

Additional information is provided in the following interviews:

With Luan Gaines on Curled Up with a Good Book - http://www.curledup.com/intmurphy.htm

A sampling of reviews (see LibraryThing and Amazon for other reviews).

I have prepared a set of book club discussion points for "A Thousand Veils" which can be obtained by emailing me at Veils1000@aol.com. I enjoy interacting with readers and have given numerous book club presentations. If your book club would be interested in selecting "A Thousand Veils," I would be happy to participate in the discussion by phone.

"A Thousand Veils" is available on Amazon (US, Canada, UK, France, Germany and Japan), BarnesandNoble.com and other online bookstore sites. It can be obtained in ebook form on Amazon Kindle and lulu.com. Numerous public libraries also have "A Thousand Veils," but if your local library does not have a copy, please ask it to acquire one.

Über meine BibliothekThe books I am showing in my library are those which I used in my research for "A Thousand Veils." They are primarily by and about Muslim women. My personal library is very eclectic and contains books in both English and French.