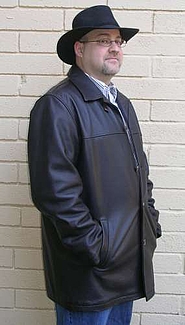 Über michI'm a science fiction novelist, blogger, and web programmer who lives outside of Washington, D.C. I was a finalist for the 2008 John W. Campbell Award for Best New Writer.

My first novel, Infoquake (website) (LibraryThing page), was published in summer 2006 by Pyr, an imprint of Prometheus Books. Barnes & Noble Explorations called the book "the love child of Donald Trump and Vernor Vinge," then later named it their Top SF Novel of 2006. Infoquake was also nominated for the John W. Campbell Memorial Award for Best Novel. The book was re-released in mass market paperback by Solaris Books in June 2008.

My second novel, MultiReal (website) (LibraryThing page), the sequel to Infoquake, was called "a thoroughly-successful hybrid of Neuromancer and Wall Street" by Hugo nominee Peter Watts, and listed as one of the top SF novels of 2008 by io9, Pat's Fantasy Hotlist and SFFWorld.

My third novel, Geosynchron (website) (LibraryThing page), the third book in the Jump 225 trilogy, was just released by Pyr in February, 2010. Already Locus has called the book "a seminal work of 21st century SF," while Library Journal said the book "tak[es] cyberpunk to the next level."

In addition to writing novels, I have also programmed websites for the U.S. Army, the FBI, ExxonMobil, and Rolls-Royce; taught software to the U.S. Congress and the World Bank; written articles for the Washington Post and Baltimore Sun; and directed the marketing departments of biometric and e-commerce companies. I am well-versed in PHP, Ruby on Rails, WordPress, ColdFusion, HTML, Javascript, XML, and CSS, and am an expert in web usability, web design, search engine optimization, and writing for the web.

Visit my website and read my blog at www.davidlouisedelman.com.

Über meine BibliothekI've got a thing for hardcovers. Doesn't necessarily need to be a first or limited edition... any ol' hardcover will do, as long as it's in excellent shape.

But if a hardcover isn't available, then a nice matched set of trade paperbacks will do just fine. I salivate over the day when I can finally complete my collection of the Vintage editions of Philip K. Dick's novels...