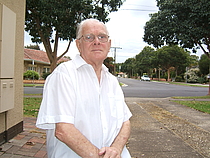 Über michBorn at Peterborough, South Australia, 28 January, 1932, educated at Thebarton Primary school and Adelaide High school. Entered University of South Australia (then S.A.I.T.) at age 30 and completed a degree course in Accountancy and a degree in Library Studies (Bachelor of Arts)and followed with a Graduate Diploma in Religion. I have written a number of books, notably the history of Thebarton Primary school, and "A Matter of Independence," which is a history of the S.A. Auditor-General's Office. Other works concern Barbara Hanrahan, novelist and artist, Sir Josiah Symon, Lawyer, M.P., philanthropist and book collector, and a small monograph, "Thebarton Cottage," about the home of Colonel William Light, surveyor of Adelaide. I have made my library available for public use under the name Wilmar Library, and through this help users in their research. The library also publishes books, generally in small editions. The book "Histoire de deux enfants aborigènes" has never been deposited for copyright.
In 1992 I married Marie-Claire who came from France. She was formerly a céramiste in Pezenas a small city in the south of France, but she now concentrates on painting, having adopted the naïve style. I have no children.
I have now to add, relative to what has been atated above, that there IS now a copy of "Histoire de Deux Enfants Aborigènes" in the National Library. This is one of a limited edition of three copies, numbered and signed, and described on the title-page as "National Library edition." This edition has both English and French text, and has a bibliographical note describing previous issues of the book.

Über meine BibliothekThe Wilmar Library was opened on 18 September, 1984, by Prof. Tony Foskett. It is my personal collection, but members of the public can have access by appointment and assistance free of charge. There are about 14,000 volumes, and serials, and postcards, and other eccentricities in the collection. Subject matter is varied, some of the more important areas of interest being literature (all nations), religion, sex, erotica, Australian history, local history (South Australia), art, library science (bibliography), etc. A few pre-1801 titles are held in the library.
There is also a small collection of books in French, mostly art and literature. The library occupies its own building, having been purpose-built to house the collection. I do not lend my books out to users, but I do make inter-library loans occasionally. Copies of some of the material published by the library can be supplied free of charge by email if requested. An example of this is the "Sandeman Scrapbook," which is about the Sandeman family. Address wilmarlibrary@internode.on.net
For personal reasons it has become necessary to dispose of some of the collection, and it has been decided that this will be done by issuing a catalogue and selling the books by auction. This matter is in hand, and it is expected that the sale will be held in 2015.