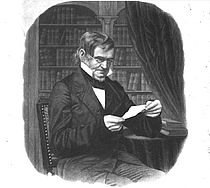 Über michJoseph Emerson Worcester (1784-1865), was an American lexicographer who, like his competitor Noah Webster, was a graduate of Yale University: Webster, Class of 1778 and Worcester, Class of 1811. Anson Phelps Stokes compares the two in volume 2 of his 1914 book, Memorials of Eminent Yale Men:

Worcester and Webster are names that group themselves together in the public mind, so it seems natural that they should follow each other in this volume, But they were far from being warm friends. Their temperaments and attitudes of mind were very different. Webster did his work with the great public and its judgments always in mind. He wanted to influence the nation. Worcester was a more modest and retiring scholar. Webster tried to change the language to conform to his ideals of what was right. Worcester was satisfied to exhibit the mother tongue as it was (323).

The books listed in the collection, Harvard College Donation Ledger 1866, are 255 volumes of dictionaries and other reference works that Worcester bequeathed to Harvard that the college did not already have copies of. John Langdon Sibley, the Harvard Librarian at the time, recorded the books in the 1866 Donation Ledger. Jerry Morris queried Harvard Library about Worcester's bequest, and one good person in the Harvard Archives Reference Department located the donation ledger for 1866 and provided images of the applicable pages. Jerry Morris then requested and received permission to catalog the books on Library Thing. Here is the Harvard Library Citation Number:
Harvard College Library. Donation lists and books received by the Harvard College Library, 1827-1877, UAIII 50.15.70.6 Box 11. Harvard University Archives.

The cataloging of the books listed in the Harvard College Donation Ledger 1866 is complete.

The cataloging of the books listed in the Catalogue of Joseph E. Worcester's Library 1865 is in progress.

Worcester's library itself is rich in Americana, religious works, and philological works. The 255 books donated to Harvard are not listed in the catalogue of Worcester's personal library. This catalogue, containing 1395 volumes, was compiled by a relative after Worcester's death in 1865. It lists the titles of the books as they appeared on the spines of the books.

Identification of the books based solely on the titles on the spines was difficult. And identification of the editions was practically impossible; therefore, almost all entries contain the phrase "edition unknown." Moreover, there were many books that were impossible to identify, and these are listed in "Unidentified items."

For information about the discovery of Joseph E. Worcester's Library, please read my post:
121 Words or More About the Library of an American Lexicographer