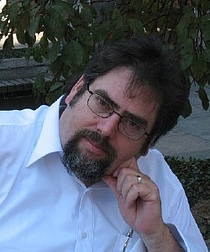 Über michLawrence M. Schoen holds a Ph.D. in cognitive psychology, with a special focus in psycholinguistics. He spent ten years as a college professor, and has done extensive research in the areas of human memory and language. His background in the study of human behavior and cognitive processes provide a principal metaphor for his fiction. He currently works as the director of research and analytics for a series of mental health and addiction treatment facilities in Philadelphia, Pennsylvania.

He's also one of the world's foremost authorities on the Klingon language, having championed the exploration of this constructed tongue and lectured on this unique topic throughout the world. In addition, he's the publisher behind a speculative fiction small press, Paper Golem, aimed at serving the niche of up-and-coming new writers as well as providing a market for novellas. And finally, inspired by his fictional creation, in 2013 he became certified as a hypnotherapist.

In 2007, Lawrence was nominated for the John W.Campbell Award for Best New Writer and in 2010 received a Hugo nomination for Best Short Story. His first book, BUFFALITO DESTINY was published in 2009, bringing the characters of the Amazing Conroy and Reggie from short stories to novel-length adventures. The sequel, BUFFALITO CONTINGENCY, came out in 2011, and several more are planned.

His other collection, SWEET POTATO PIE AND OTHER SURREALITIES, spans 20 years of surreal stories and poems, representing the range of fantasy styles.

Lawrence lives near Philadelphia with his wife, Valerie, who is neither a psychologist nor a Klingon speaker.

Über meine BibliothekI've been collecting books from earliest childhood, though most everything got "purged" when I went off to graduate school in 1983. Since then, in an effort to keep the books from taking over the house, I've tried to follow one rule: to only buy hard bound, first editions. Even so, the books are starting to take over... good thing I've moved into a bigger house!