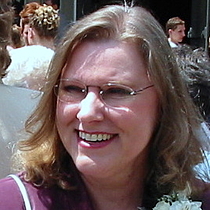 Über michI'm a science geek and history junkie. Before becoming a novelist, I worked as a lifeguard, paralegal, systems analyst, human resources executive, and college professor. It's not that I can't keep a job; it's that there always seems to be something new to learn. Writing allows me free range of curiosity.

My first historical novel, Selene of Alexandria, is now available through Booklocker.com, any online bookstore, or order from your local bookstore. My second book, Twilight Empress: A Novel of Imperial Rome, won first place in the Historical category in the Maryland Writer’s Association contest. I'm currently working on two new novels—both set in the time of Imperial Rome and featuring strong female protagonists.

My award-winning short stories and poems have appeared in such publications as Circles in the Hair, Alternate Realities, and Beyond Science Fiction and Fantasy. I've published over fifty articles in venues such as Salon.com, Writer's Digest (cover article,) The Writer and The Copperfield Review. I've interviewed such award-winning authors as Anita Diamant, Ursula K. Le Guin, Nancy Kress, and James Morrow. I'm a frequent contributor to Strange Horizons, Associate Editor for Space and Time Magazine and a co-founder of a twenty-year-old writer’s workshop.

I write in my historic land-marked home “The Suffragette House” in Brooklyn, New York where I live with my husband, daughter and the required gaggle of cats. For fun, I like to dig in the dirt—my garden and various archaeological sites.

Über meine BibliothekIn my personal library I have a HUGE number of research books and non-fiction. My on line library tends to be fiction and is heavy on the classics, historical fiction, and SF. I'm an active member of Bookcrossing.com which advocates moving books off your shelves and out into the world through trading, give-aways, and "wild releasing" (leaving a book in some public space where another can pick it up and continue its journey.) So my fiction shelves constantly churn. I've listed books here that I'm keeping for some reason, but that doesn't mean they won't disappear later.