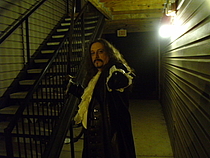 Über michGreetings my new friends, I am the first born of three boys. It was difficult growing up after 11 years old, my dad left us with nothing. He told me I was the man of the house at 11. Then we moved to Ocean Springs, Mississippi for one year and my life was wonderful. That didn't last long, we had to move out and we moved to Gulfport, Mississippi. I hated living there. I started playing drums in a country band to feed my family. My mom died in Oct. 2004 and my grandma died in Dec. 2004 and then I found out about having a heart condition and needed a pace maker April 2005. Then August 2005, after Hurricane Katrina, my family (old lady, daughter and son) lost everything so we moved to Tennessee to start over. I used to play drums in a heavy metal band up here but I found out I had congestive heart failure, so it stopped me from playing (depressed because I couldn't play), so now all I have is writing stories with one wild and crazy imagination. I am an horror dark urban new adult fantasy published author. I am interested in the occult, paranormal, supernatural, werewolves, vampires, aliens, cryptozoology, heavy metal music, reading, movies and video games. I have two published dark fantasy books. I am writing on my third book now and posted a short sneak peek on here. If you read it please leave a comment letting me know what you think. My first two novels Moonwarriors and Moonwarriors: Guardians Of The Night are about heroic werewolves waging war against the forces of evil, classic vampires. Can be bought from Amazon. The third book has so far had a serial killer and a few demons in it. There are going to be in the new novel: aliens, demons, angels, witches, flesh eating ghouls (zombies), demonic werewolves and demonic vampires. It's coming along nicely. Happy Reading . .

Über meine BibliothekMost likely it is be dark books. Like horror, dark fantasy, and urban fantasy.