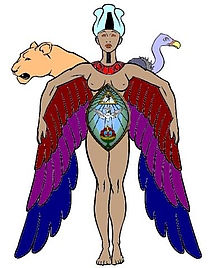 Über michSekhet Bast Ra Ordo Templi Orientis found its start unofficially in late 1983 when Frater yh returned to Oklahoma at the end of his military service. He had been initiated into the Minerval, First and Second Degrees of the O.T.O. by Hymenaeus Alpha. On his return he received permission to start an official O.T.O. body in Oklahoma and a charter to initiate up to the Second Degree. The small meetings at this time laid many foundations for the future of SBR.
In August of 1984, with nine Minerval candidates, Sekhet Bast Ra was granted Camp status as a satellite body of Thelema Lodge in Berkeley, California. The master of the camp at this time was Frater yh. Frater yh and Soror vh performed these first Minerval initiations on the 11th of August. In December of the same year Sekhet Bast Ra celebrated its first public Gnostic Mass, continuing with regular performance of the Mass despite having to move the temple location several times. During 1985 Fr. yh received his Third Degree, and the charter to initiate to that degree.
Sekhet Bast Ra was given Oasis status on March 21, 1986 e.v. , and in July of that same year performed the first initiations into the First Degree in Oklahoma.
The success and reputation of the body had been quite secured, and on June 20, 1987 e.v. Sekhet Bast Ra was granted Lodge status with the first Second and Third Degree initiations were performed on July 25, and July 24 respectively. The growth of SBR brought initiators from California with the first Fourth Degree, P.I. and K.E.W. initiations in Oklahoma. Arch-Bishop Lon DuQuette also ordained the first Priests and Priestesses of the E.G.C. in Oklahoma. Many of the candidates from this time period went on to start their own bodies, heralding a great growth within the O.T.O. for the Southwest, Midwest and Plains States.
On May 4, 1993 e.v. joint control of charter for Sekhet Bast Ra and charter to initiate was passed to Frater Hunahpu and Soror Ixel Balamke, returning SBR to Oasis status. With renewed activity, SBR finished off its first full cycle as an Oasis with the production of Aleister Crowley’s Rites of Eleusis which began in January of 1993 e.v. Initiations increased in frequency, and the few years that followed saw great change and evolution for the O.T.O. in Oklahoma.
During 1995 e.v. Sekhet Bast Ra was equipped to perform regular baptisms and confirmations, and in May of 1995 ordained the first Deacon of both SBR and Oklahoma. These years saw an increase in public awareness with a homepage launched on the World Wide Web in January 1996 e.v. gaining many an ally in the local and national Thelemic community.
On April 19, 1997 e.v. the Electoral College again bestowed lodge status to Sekhet Bast Ra. By 2002 e.v. the lodge was under the sole mastership of Soror Ixel Balamke, and the EGC sanctuary had multiple Deacons as well as Priests and Priestesses regularly celebrating the Gnostic Mass.
In October of 2003 e.v. Sekhet Bast Ra passed the chair to its fourth master, Soror AHBH., and was again classified and chartered as an Oasis.
In 2005 e.v. Sekhet Bast Ra celebrated the opening of its public sanctuary and temple with dedicated space for the Gnostic Mass as well as ample bookshelves and space for classes and discussions, and initiations.
Shortly after Sekhet Bast Ra celebrated its 25th year as an O.T.O. body the mastership chair was passed to Soror IMMEIV. With regular public celebration of the Gnostic Mass as well as monthly classes and discussions.

In 2005 e.v. Sekhet Bast Ra opened its public temple, and is currently active in the local magickal community.