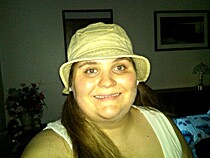 Über michI'm happiest when life is accompanied by the sound of my keyboard clacking. Or, alternately, a good book and late night, ill-advised overpriced coffee.

I was born and raised in Las Vegas, Nevada and knew I wanted to be a reporter when I was nine years old.

And, after a meandering educational path, I became one, for a good seven years anyway, working as both a staff reporter and freelancer for sundry print newspapers and electronic publications.

I'm a social media and communications consultant for small and micro-businesses, which is just a fancy way to say I figured out a way to Facebook for a living. My biggest client is the Brain Injury Alliance of Arizona, a nonprofit organization I became a member of in 2012 because my husband is a high functioning traumatic brain injury survivor.

Because I became a reporter, none of that led to making money, but since I'm the first person in my immediate family to graduate college, and a nerd besides, I'm still pretty proud of my academic achievements.

And, I've written all manner of things to pay the rent, ranging from general assignment newspaper articles to ad copy for Australian shipping crates.

Über meine BibliothekIn addition to reading far past my bedtime, my general literary interests include:

But really, nearly any mystery will do, including gritty contemporary tales a la Denise Mina, classics from Agatha Christie and current authors like Tana French.

I also enjoy graphic novels and comics. Although I like superheroes, particularly Daredevil, Thor and Wolverine, my favorites include the Fables series by William Buckingham, Chew, Preacher, and of course Sandman. I like Frank Miller as a writer (his Daredevil origins story, "The Man Without Fear" is a masterpiece), but not as an artist.

-- Classic literature. I started reading the classics because they were always in the "free" box at yard sales and libraries, but now I've come to realize I just enjoy the genre. Faves include "The Three Musketeers," "East of Eden," and of course the Sherlock Holmes canon.

Lieblingslisten1001 Books You Must Read Before You Die, Classics you know you should have read but probably haven't