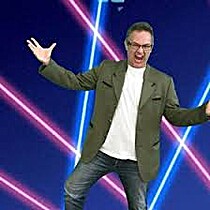 Über michKevin Smokler (@weegee) is a writer, documentary filmmaker and host with a focus on popular culture. He’s the author of the books Brat Pack America: A Love Letter to 80s Teen Movies (2016) called “An absolute delight” by Library Journal, the essay collection Practical Classics: 50 Reasons to Reread 50 Books you Haven’t Touched Since High School (2013) which The Atlantic Wire called “truly enjoyable” and the editor of “Bookmark Now: Writing in Unreaderly Times,” A San Francisco Chronicle Notable Book of 2005. His essays and criticism has appeared in the LA Times, Salon, Fast Company, BuzzFeed, Vulture, The San Francisco Chronicle, The Decider and on National Public Radio.

In 2020, he co-directed and co-produced the feature-length documentary film Vinyl Nation on the contemporary renaissance of vinyl records in America. Vinyl Nation has been called “a lively, engaging affair” by Film Threat and a “populist unifier” by Salon.

Kevin has been fortunate to lecture, teach and host cultural events for venues and organizations across North America including New York Comic Con, M.I.T, South by Southwest, The LA Times Festival of Books and The Commonwealth Club of California. He’s appeared in conversation onstage with comedians, playwrights, authors, magazine publishers, architects, musicians and filmmakers.

Kevin holds a bachelor’s degree in Writing Seminars from Johns Hopkins University and a Masters in American Studies from the University of Texas at Austin. A native of Ann Arbor, Michigan, he has lived for the last 20 years in his adopted home of San Francisco with his wife and far too many books and vinyl records.

Über meine BibliothekGrows one book at a time then spreads like brushfire.

Lese geradeGhosts of Mississippi: The Murder of Medgar Evers, the Trials of Byron De La Beckwith, and the Haunting of the New South von Maryanne Vollers