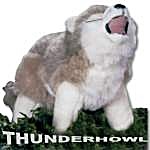 Über michI'm a bit of a geek, as you can no doubt tell from my library and tags, and I love to read. Also:

In the early 70s, Thunderhowl was presented with a gift that would later shape the rest of his life. He was given, by Jenny Greensleeves herself, the ability to remove his own arms and eat live children. Unfortunately, these are superpowers that Thunderhowl rarely is able to use. Born and raised in an underground lair, Thunderhowl currently resides in the bottom third of a rectangular place. He is currently employed in the service industry, where he controls the setting of the sun and the removal of undesireable entities from the temporary habitats of humans. Although his current occupation is more of a means to an end rather than a lifetime career, he does wish someday to be an evil overlord with good intentions. Or was that a good overlord with evil intentions? Either way, he would like all people to recognise his incredible power over them, which he demonstrates by waggling his index fingers in the most unnerving way. Thunderhowl requires biofuel in order to remain operational, and when his regenerative cycle is interrupted or somehow cut short, he has been known to short circuit. Contrary to poplarly held beliefs, Thunderhowl believes that there is an end to all things, and would gladly trade in his superpower abilities for the knowledge that he will be there, with a marching band at his disposal, along with some very sexy baton twirlers, to welcome it. He's a fatalist, really, which is probably a good thing to be when you're an evil overlord.

Über meine BibliothekFull of series, mostly related to roleplaying games and fantasy and science fiction. Isn't it shocking how expensive books are getting? Ah well, reading paper books is the closest thing I'll ever have to an addiction, so I guess I'll just have to keep buying them. ;)