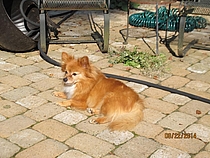 Über michMy favorite reads of 2008 were:

Rashomon by Akugatawa
The Little Girl Who Was Too Fond of Matches by Gaetan Soucy
The Shock Doctrine by Naomi Klein
Tree of Smoke by Dennis Johnson
Sacred Ground by Vikram Chandra
The Children by Edith Wharton
The Book of Ebenezer Le Page by E.G. Edwards
The Last September by Elizabeth Bowen
The Sound and the Fury by William Faulkner
The Good Women of China by Xianan

My "desert island" books are:

The Raj Quartet by Paul Scott
Life: A User's Manuel by Georges Perec
The Goldbug Variations by Richard Powers
Buddenbrooks by Thomas Mann
Tristram Shandy by Lawrence Stern
Ada by Vladimir Nabokove
The Makioka Sisters by Tanizaki
Cloud Atlas by David Mitchell
Little Dorritt by Charles Dickens
The Sound and the Fury by William Faulkner

Runner-up "desert island" books would include:

Vanity Fair by William Thackeray
A Suitable Boy by Vikram Seth
Wild Swans by Chang
A Fine Balance by Rohinton Mistry
Mr. Bridge/Mrs. Bridge by Evan Connell
The Manor and The Estate by I.B. Singer
Underworld by Don DeLillo
Absalom, Absalom by William Faulkner
The Things They Carried by Tim O'Brien
Jude the Obscure by Thomas Hardy
David Copperfield by Charles Dickens
and I could go on and on!

Über meine BibliothekThe books in the "Your Library" collection are books I currently own which are on my shelves. Within this collection, those tagged TBR are those I have yet to read.

All other Collections are books I do not own. The collection "Borrowed Books and No Longer Have" are books I've read that I once owned and gave away, or that I got from the library. All other collections are books I'm interested in to one degree or the other, many of which are LT recommendations. The books in the "Look For Now" category are the books currently at the top of the wish list.

When I star books, 3 stars means a very good book, one that I would have no hesitation in recommending, especially if you are interested in the genre or subject of the book. 3 1/2 stars is a very good book, one that I especially liked and connected with. 4 stars is an excellent book, standing out above most other books, a book which will stay with me a long time and which I may want to reread. A 4 1/2 star book is a near perfect book, which will probably be around for a long time. A 5 star book is a book I expect to be around for all time.

A 2 1/2 star book can be either a perfectly good book which did not resonate with me, or a book with minor flaws. 2 stars is a book I did not like, or which had major flaws. 1 1/2 stars means you are taking a big chance if you read that book. 1 or 1/2 means definitely do not bother reading the book.