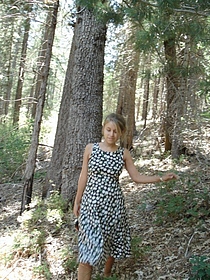 Über michI've been a book junkie for my whole life. A defining moment: I was around ten years old, at Barnes & Noble with my mom and we had just bought several bags of books. Mom was grumbling about my addiction, and the cashier said to me with a big grin, "Well honey, it's the best addiction you can have: no harmful side effects (except for your wallet) and lasting benefits for your brain." I work in a bookstore now, and repeat that litany almost every day as a little bit more of my paycheck goes back to the store and my to-read stack gets ever more precarious.

When not reading, I paint, weave, knit, try my hand at fancy vegan recipes (and give up and make pasta), watch so-bad-its-good zombie movies, do yoga, fuss in my tiny herb garden and hand out homemade tinctures to friends who humor me. I'm a recently trained labor doula, and am hoping to start attending home births. I'm also looking at an herbalism apprenticeship for next year.

Über meine BibliothekIn general, I'll read just about anything, particularly if I find it at a library book sale (a lot of the literary fiction and chick lit I own is due to the 50 cent table). For a long time, I lived and breathed Fantasy novels, and Urban Fantasy still is an obsession. I went to school to study the classics, loved (and kept) all the Greek and Roman works (although I petered out during the 17th century political philosophy and switched schools), so you'll see some of those books here, and eventually I'll tag them as such. Lately, I've been on a non-fiction kick, started with travel lit, has now morphed into a quest for goods reads about feminism, anarchism, sustainability, intentional communities, LGBT, sexuality, comparative religion, and anthropology. Also read quite a bit of spirituality, but am inexplicably picky about that. I've been pondering the most succinct way to describe my non-fiction reading habits, and this is the best thing I've come up with: I'm interested in books that offer some idea of what it means to live well.

A note about my kind of wacky collections: I'm using LT to (among other things) keep track of what I've read and when, to keep track of what I own and no longer own, and to get recommendations. So, to keep my recommendations relevant, some things I no longer own or read a long time ago won't appear in my library because I'm no longer interested in them. Other things will appear both in my library and another collection, because I'm interested in the recommendations from them. My brain works in mysterious ways. The partially read collection is mostly to remind me to pick up those books again, as I'm very easily distracted and am working on actually finishing things- what a novel concept!