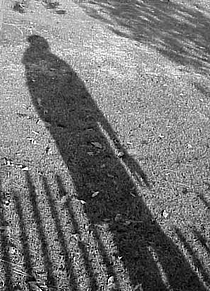 Über michI read a lot and do some writing. My current average is about 35-50 books a year. The exact number depends on the books and depends on the year. I'm also a movie obsessive and a rather pathetic music addict (I can't seem to go for a walk without making an iPod playlist for the event). My username was something my ex-wife came up with, a combination of two of my favorite things. The profile picture is a still from the original "Nosferatu," one of the classics of silent cinema and one of my favorite movies.

Über meine BibliothekI've left comments on each book concerning where I purchased it and any special circumstances surrounding it. These are approximately as accurate as my memory. There are no real patterns to my book purchasing. I go through phases and buy a pile of, say, science fiction and then a month or so later get really interested in classical literature again. Scattered and eclectic, not too deep and sort of all over the place. Much like my mind. My ratings tend to be on the high side, as I don't keep books I don't really like. I've also cleared out a considerable amount of my collection over the years (trading in old books to buy...MORE BOOKS! It's like a gift that keeps on giving) so the "unread" tag appears more frequently than any other. I have more than twice as many unread books than read ones in my collection. I feel no embarrassment about this. Because when you get down to it, who will always have something new to read? (Answer: Me).