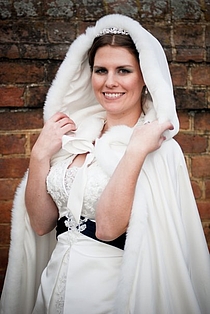 Über michAfter having earned a bachelor's in English from Alfred University, I graduated with a love (or obsession) for British literature-- particularly 18th and 19th centuries. I'm drawn to that period's language and stories (and if someone sparks up a debate with me on how Victorians were repressed prudes, I will get feisty and fervently disagree with you)... modern fiction just doesn't match up to the quality of back then. Besides, when I read, I want to imagine a different world than the one I already live in. Reality can be dull and uneventful sometimes. :P

I have tucked away my English degree that served more as a "yay, I love it" than an actual "yay, I'm going to use it"... and earned a Master's in Elementary Education at Boston College.

I was a second grade teacher for two years, and life led me to being an Art and Photography teacher for private middle and high school and owning Bit of Ivory Photography. I get to teach and do what I love-- in school and outside. :)

Über meine BibliothekIt's an eclectic bunch of 18th and 19th century and Christian books... with a smathering of this-and-that. Moving around has taken a hit to the good ole library though... being from Virginia, going to college in New York, then moving to Massachusetts will do that to you.

I love collecting really, really old books. Books with before-the-days-of-ISBNs! The raggedier, the better. My oldest one so far is 1911 (The Innocents Aboard; or The New Pilgrim's Progress by Mark Twain)... someday, someday I'll have much older ones. Just have to find out what I'm obsessed about first. ;) Hopefully by then I'll have a permanent beautiful dark cherry wood bookcase towering to the ceiling... oh, swoon (I'm a nerd)! :)

My favorite book is Gone with the Wind by Margaret Mitchell (anyone else who would squeal with delight once she entered Mitchell's house in Atlanta?!)... but Woman in White by Wilkie Collins has crept into "one of the best written novels ever" for me.