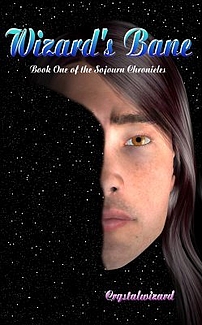 Über michI am both an author and a graphic artist, though my three cats would tell you a different story. They're of the opinion that my only reason for existence is to feed them, pet them and let them in or out of the house! They're good kitties though, and make wonderful companions.

I started writing in my Junior year of high school. At the time, I'd read everything the school library had that interested me, so it just seemed natural to write what I wanted to read, since no one else was. A small group of us would get together and talk stories, developing characters, plot lines and just in general having fun. My universe, and ultimately the books I have in print, developed out of that.

Being a writer is a lot like living on a wild roller coaster. Sometimes all you can do is hang on for the ride while the story pours out of your fingers, and sometimes you have to fight tooth and nail for every letter! It's a lot of fun, and I wouldn't trade it for anything in the world. It would be nice though if inspiration didn't insist on hitting me after the lights were out and I was half-asleep so often!

Along with fiction, I also write poetry. I don't write free verse often, it's just not something that matches with my inner self. I stick more with specific rhyme and meter. While some people might consider that restrictive, I am very pattern oriented. The words generate in stanza's, and I usually don't have much control over that.

As an example, here's a poem I wrote just a couple nights ago. It's called The Poet's Lament:

The lights are off,
The house is still,
I'm headed off to bed.

The blanket's soft,
The pillow's deep,
Soon dreams will fill my head.

But first there comes
A tip-toeing
A teasing little rhyme.

A single word
Resolves itself
With meter and with time.

Oh Pox! I snarl,
Oh go away!
Why is it every night,

That just as soon
As I settle down
I get the urge to write?

I get back up,
Turn on the lights
And sit down at my desk.

The words which filled
My thoughts and mind,
Now laugh at me in jest.

My mind's gone blank!
I've lost it all!
I stare off into space.

There's nothing there,
The ink has gone,
Just silence in it's place.

I'm too awake
For sleep or dreams.
I'm too asleep to think.

This curse which lurks
With in the dark
Has driven me to drink!

If anyone would like to read more of my poems or short stories, there are some in my profile on writer's cafe at this link:
http://www.writerscafe.org/profile/crystalwizard.

Currently, I am working on a sci-fi fantasy series called The Sojourn Chronicles. There are six books in the series, with the first three in print. Those are :
Book 1 - Wizard's Bane
Book 2 - Villenspell: City of Wizards
Book 3 - Wizards and Wanderers

Book 4 through 6 are written, but I have all the art and covers to do yet, so it'll be a while before they are in print.

The story follows an unlikely group of misfits as they journey to unknown lands in a desperate attempt to save the world. Unfortunately, the world doesn't seem to what that salvation and mishaps befall them at just about every step.

All of my books are available on Amazon.com or other online stores, however you can also order them from the publisher. For more information on them, as well as reviews and illustrations, see my web site at:
http://sojourn.omnitech.net.

When I'm not writing, I'm creating art in other ways, mostly digital, though I do have a camera which comes out of it's case once in a while. I'd probably take more photos, but I'm sadly lacking a dark room at the moment, and as nice as digital photos are, they just aren't the same as film. I do a lot of computer graphics, including the covers of my own books, the covers of other people's books, posters, illustrations, email signatures and various other pieces. A lot of my art is created for private individuals, and I don't have it on display any where, but I do have a nice gallery online. If you'd like to take a look, you can visit me at:
http://artwanted.com/crystalwizard.

What little time is left between writing and creating art I use fixing computers for people or pursuing chocolate ;) Seriously, you can't give a free-range chocolate bar a chance to escape!