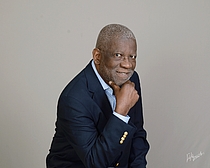 Über michIn 2010, Guyanese-born Erwin K. Thomas, Ph.D.–served as vice president of the Institute for Learning in Retirement (ILR) Old Dominion University, Virginia Beach, VA. After 28 years he retired as a professor and director of the Graduate Program in the Department of Mass Communications & Journalism from Norfolk State University, VA. He formerly taught at the University of Wisconsin– Milwaukee (1978–79), SUNY–Oswego (1972–74), and University of Guyana, Georgetown (Summers 1981 & 1988).

Thomas has authored Make Better Videos with Your Camcorder (TAB Books 1991); co-edited with Brown H. Carpenter a Handbook on Mass Media in the United States and Mass Media in 2025, Greenwood Press (1994 & 2001) respectively; A Weekly Encounter (2015), Keys of Faith (2016), Gifts of God (2017), Life’s Passages: From Guyana to America, Guyana’s Seawall Girl (2018), and Heaven Bound (2019) through CreateSpace Independent Platform. For many years Thomas has been a member of the Association for Education in Journalism and Mass Communication (AEJMC)–where he held positions in the International and Minorities Divisions, as well as the National Association of Broadcasters (NAB). Thomas is a member of Virginia Writers Club (VWC), Hampton Roads Writers (HRW), and the American Academy of Religion (AAR). His research interests are: International media systems, social media, ethics, broadcasting history, Christian & interfaith living, and comparative world religions.

Thomas is a lifelong member of the Church of the Holy Apostles–an ecumenical community of Episcopalians and Roman Catholics, Virginia Beach, VA - where he has served on the Vestry Council, Eucharistic minister, and social media administrator. He is married to Mary Barta Thomas–a retired librarian from Tidewater Community College, Chesapeake, VA – and they are the parents of Matthew J. Thomas – a genetic counselor in Cardiology at University of Virginia, Charlottesville, VA, where he lives with his wife Shannon.

Lese geradeHot, Flat, and Crowded 2.0: Why We Need a Green Revolution--and How It Can Renew America von Thomas L. Friedman