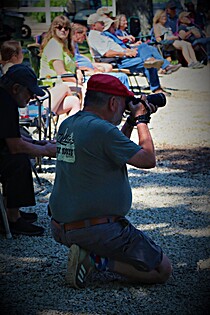 I grew up in Kalamazoo, served in Vietnam, graduated from Macalester College, and retired after more than three decades as a government bureaucrat. Joan and I usually vacation in West Virginia, northern Michigan, or northern Minnesota--all of which are mining areas. We've lived in our small town for over twenty years. I'm the author/webmaster of A Fan's Guide to the Midwest League, which is no longer being maintained, and the keeper of A Dabbler's Journal, which I occasionally update.

These days my main pastime is photography (see my pix on flickr). And I've always gone to baseball games.

Über meine BibliothekThere's a ton (possibly literally) of baseball reference material, many books devoted to Great Lakes history and tourism, some mining history materials, computer and camera books in various flavors, and a lot of science fiction. There are remnants of what once were fairly serious railroadiana and bicycling bookshelves. I've recently completed reading Robert B Parker's Spenser novels and Colin Dexter's Morse novels, and these days my reading includes books about making popular music (especially bluegrass, but hardly exclusively). I also read novels that resemble the Horatio Hornblower set, including several SF series (space operas, all of 'em) based on the Royal Navy. I tend to buy heavily on specific topics as things strike my fancy. Those infatuations, too, show here.

About twenty percent of these are Joan's. Hers run to nature guides, mysteries, Tom Clancy-like books, Stephen Jay Gould, and Richard Feynman; she's been on a Evanovich/Peters/Grafton kick recently, but seems to have pretty much exhausted that vein and has moved on to Conan Doyle imitators.

While there's some system to my tags, I'd never be mistaken for a systematic tagger.

Reviews: I rate everything I read. I write reviews if 1) I've got something to say and 2) what I'd say hasn't been covered by other reviewers. I'm therefore unlikely to add a review if the book already has several others. I'm more likely to review nonfiction than fiction, but see point 1) above. Some of my reviews merely summarize the contents while others are more critical; a few are just comments or wisecracks. I am also systematically writing reviews of some basic baseball research titles, whether or not anyone else has commented. I also writie occasional notes about publishers who haven't solved ebook publication; these notes generally follow a perfunctory review of the book that prompted the comment. Ratings on the ebook-publishing reviews concern the textual content only; folks who gig authors for other folks' mistakes are a pet peeve.

Most of my reading, these days, is published electronically; the same is true of Joan. She owns a Kindle and a Fire, while I've owned a Kindle, three Nooks and a Sony Reader. My smartphone and my tablet computer have several ereader apps apiece. I've used all these devices, and they are different but largely interchangeable. This is an evolving technology; none are everything they could be, though Amazon's been moving the Kindle in the right direction.

I'm aging, and the house is small, so I've taken to selling books on Amazon. Those sales have roughly balanced the book purchases I've made over the past few years. Since most of the new purchases, these days, are ebooks, I've even managed to free up some shelf space.