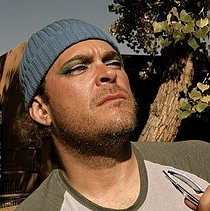 Über michEnvision a blend of a mentally ill mind with unsurpassed resiliency and fiery intellect and your result would be the brilliant Jonathan W. Harnisch. An all-around artist, Jonathan writes fiction and screenplays, sketches, imagines, and creates. His most recent artistic endeavor is developing music; a new-found passion with visible results already in the making. Produced filmmaker and published erotica author, Jonathan holds myriad accolades, and his works captivate the attention of those who experience it.

Manic-toned scripts with parallel lives, masochistic tendencies in sexual escapades, and disturbing clarities embellished with addiction, fetish, lust, and love, are just a taste of themes found in Jonathan's transgressive literature. Conversely, his award-winning films capture the ironies of life, love, self-acceptance, tragedy and fantasy. Jonathan's art evokes laughter and shock, elation and sadness, but overall forces you to step back and question your own version of reality.

Scripts, screenplays, and schizophrenia are defining factors of Jonathan's life and reality, but surface labels are often incomplete. Jonathan is diagnosed with several mental illnesses from schizoaffective disorder to Tourette's syndrome; playfully, he dubs himself the King of Mental Illness. Despite daily symptomatic struggles and thoughts, Jonathan radiates an authentic, effervescent, and loving spirit. His resiliency emanates from the greatest lesson he's learned: laughter. His diagnoses and life experiences encourage him to laugh at reality as others see it. Wildly eccentric, open-minded, passionate and driven, Jonathan has a feral imagination. His inherent traits transpose to his art, making his works some of the most original and thought-provoking of modern day.

Jonathan is an alumnus of Choate Rosemary Hall. Subsequently, he attended NYU's Tisch School of the Arts where he studied film production and screenwriting under Gary Winick and David Irving. During his studies at NYU, he held internships under renowned producers Steven Haft and Ismael Merchant. He is best known for his short films Ten Years and On The Bus, both of which boast countless awards including five Indie Film Awards, three Accolade Awards, and winner of Best Short Film and Audience Award in the New York International Independent Film and Video Festival, to name a few.

Despite his impressive formal education and awarded honors, Jonathan is your normal, down-to-earth guy. Meditation, Duran Duran, vivid colors, Patrick Nagel prints, and rearranging furniture are some of his favorite things. Vices include cigarettes, Diet Coke, inappropriate swearing, and sausage and green chile pizza. He enjoys irony, planned spontaneity, redefining himself and change. Jonathan lives with his beautiful wife Maureen, their three dogs and seven cats, in the unique, desert village of Corrales, New Mexico.

Über meine BibliothekI am a writer of transgressive fiction and my forthcoming novel series, "Porcelain Utopia" is detailed below:

At the opening of Porcelain Utopia, the reader is presented with two protagonists. There's Ben, the narrator of the preface, who relates the story of the awful sex education classes he sat through in middle school and of his subsequent discovery of his father's collection of pornography; and then there's Georgie, a sexual submissive with a foot fetish, who is obsessed with his beautiful and manipulative next-door neighbor Claudia. As the story progresses, however, it becomes clear that Georgie and Ben share a single three-dimensional body. Georgie is a character in a novel Ben is writing, and Ben maintains that Georgie is in fact no more than a literary device. However, it is clear almost immediately that this is not the case. Throughout his life, Ben has received a number of psychiatric diagnoses, ranging from Tourette's Syndrome to borderline personality disorder to schizoaffective disorder, and he displays some traits of all of these. Yet amid all these diagnoses, the one thing that seems to have slipped under the radar thus far is his tendency towards emotional dissociation, which is closely related to post-traumatic stress syndrome. It is this dissociative tendency that has led Ben to create Georgie, a safe repository for the emotions and desires, primarily sexual, that Ben himself is unable to process.

Initially, therefore, the life of Ben and Georgie is fairly well ordered. It is clear from the start that Ben has issues relating to women: his romantic life has been a string of broken relationships and missed opportunities, and though he needs love desperately he finds himself overcome by fear around women. Whenever this issue arises, Ben retreats into Georgie's relationship with Claudia. Claudia is compelling, manipulative, emotionally abusive, and tremendously sensual. She controls Georgie completely, only allowing him sex at certain times, alternately telling him she loves him and that she couldn't care less about him, telling him she won't sleep with him and then inviting him to watch her sleep with other men and other women. Yet Georgie is inextricably drawn to her, accepting all of the emotional pain that comes with his relationship with her as long as he can continue to hope that she may sleep with him again. The sex they share is gritty and fetish-laden, with strong overtones of sadomasochism and violence, and their relationship itself is sustained entirely by Georgie's obsession. Yet he is unable to let Claudia go. Similarly, Ben claims that Georgie's relationship with Claudia is based on his own relationship with Heidi yet as the story progresses, we learn that Heidi is a lesbian whom Ben met once some months ago when she was in town for a conference, and that after one night, she left town and Ben had never heard from her again. In Ben's relationship with Heidi, mirrored in his imagining of Georgie's relationship with Claudia, it is clear that his interest is not in Heidi but rather in the image of Heidi, which, in the absence of the real Heidi, Ben can mold into whatever he needs her to be. Heidi is the locus of Ben's obsession, as Claudia is the locus of Georgie's; however, the root of these obsessive tendencies lies somewhere else entirely.

The root itself becomes clearer as Ben begins therapy with Dr. Christine Morales. Ben was initially put in therapy after a struggle with addiction issues and mania combined, which culminated in his attempting to hold up a bank with a cell phone he pretended was a bomb. Although Ben's participation in therapy was mandated by the police, Ben adapts to therapy quickly, beginning an honest attempt to learn the reasons for the addictions, disorders, and obsessions that are slowly killing him. Yet as soon as he begins to dig into these issues, he finds himself overwhelmed by the strong emotions and confusion that flood through him. It is clear that there is something that Ben can't bear to look at, something that has so shattered him that he has been forced to split his identity into two to keep himself feeling safe. He can't know what it is, but at the same time, his work in therapy causes him first to question and then to begin to dismantle the coping techniques he's developed his alter ego Georgie, his addictions, his lusting after impossible women. He finds himself so conflicted that he goes off his medications entirely at one point, deliberately if subconsciously inducing psychosis to avoid having to face the terrifying question: what it is that makes me act this way?

When he returns to his medication and emerges from the psychosis, he realizes he can no longer avoid confronting the true issue. His mother has been a taboo subject for him all these years, his relationship with her a corner of his psyche he keeps securely closed down. With the help of Dr. C, he begins to process her abuse of him. He begins by relating the physical abuse she subjected him to then progresses to her emotionally abusive tendencies, but he is still strangely detached. Finally, on the brink of slipping once more into madness, he is able to remember the sexual abuse he suffered at her hands, the abuse that melded the concepts of arousal and repulsion in his brain, the abuse that left him yearning desperately for the love of a woman but unable to understand what healthy love might look like. With this knowledge, Ben can at last begin to confront his symptoms head-on and to hold out hope for a less troubled life.