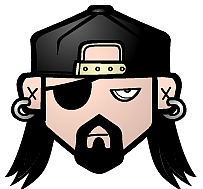 Über michI'm a geek. Tech, comics, games and stuff like that are a high priority for me. TWiT, Digg and Geekdrome are some of my favorite things online. Mac rules, but I avoid platform wars like the plague. (Everybody loses.) WoW level 60 forsaken warlock. Horde>Alliance.

I'm an atheist and a skeptic. James Randi is my hero. I listen to Penn radio daily, and am entertained even when I disagree with him. Mythbusters might not be science, but it's damned entertaining. I strongly dislike religion, but get along fine with religious people. I hate "psychics" but oddly enjoy fiction about them.

I'm a politcal moderate extremist. I think both the left and right are full of it. I hate big government, but hate more that the Republicans don't know that they ARE big government. I wish I was a Libertarian... but I'm just not. Libertarian-lite, maybe.

Über meine BibliothekMy library at home consists of a several of crowded bookshelves and many stacks and/or piles of books scattered throughout a couple of rooms. The books themselves are of a wide variety of topics, and listing all the categories here would be difficult, however there are certain topics which do dominate the shelf (and floor) space.

These include: Religion/Philosophy, Cyberpunk/SciFi, History, War and Writing.

I entered a handful of books (29) because it was so easy to do and that was enough to play around with. Then I realized you can import from Delicious Library and I became a VERY happy camper.

If the two products could be *merged* I'd be ecstatic, but now we're just talking pipe-dreams so...

I plan to export from Delicious Library and import into the site, but since that's going to excede 200, so I'll need to upgrade my account first. S'okay... worthy cause. Lifetime membership here I come.