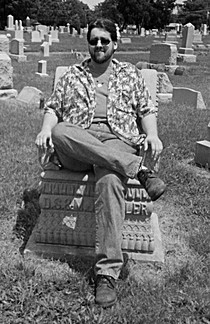 Über michMy latest book, Performed by Lugosi, is currently available at Amazon.com, or at a bookstore near you!

Live too far away to attend a local book signing? Autographed copies of Performed by Lugosi can now be ordered online at The Author's Den for no additional charge.

Born in Rochester, New York, and raised in New Jersey, where the weak are killed and eaten, S. Michael Wilson is 36 years old and shows no signs of throwing in the towel just yet.

S. Michael Wilson has held a number of jobs throughout his life. Starting out as a stock boy at the now-defunct Woolworth's, he went on to manage a comic book store, sort mail at the United States Postal Service, run the projection booths at various movie theaters throughout New Jersey, test underground fuel tanks, act as production assistant at two Miss America Pageants and the 1994 Presidential Gala at Ford's Theater, and fill the role of Backroom Team Lead at Target. Currently, he is a senior associate at The Light House, a film & television sound stage and lighting rental house based out of Central New Jersey, where he has worked for the past 14 years.

During all of the these jobs throughout the years, he wrote.

In the early 90's, he published an underground humor zine, The Mongoloid Moose, which gained a small but loyal fanbase through its thirty-six issue run.

Since then, he has worked in various writing formats; short stories, screenplays, book and movie reviews, and blogging.

Most recently, he was approached by Idea Men Publications (IMP). Having dealt mainly with true-crime, IMP was looking to branch out into other forms of popular entertainment, and asked him to collaborate on some books with horror and science fiction films as the major theme. The first product of this collaboration, Monster Rally, which S. Michael Wilson both edited and contributed to, has a release date scheduled for late October. Other IMP projects, including an examination of Bela Lugosi films adapted from classic literature, are due out in the near future.

On top of his work with IMP, S. Michael Wilson has several projects in the works. Among these are a book dedicated to bad movies, and a collection of articles from his humor zine, The Mongoloid Moose. Negotiations are also in the works regarding the production of a screenplay co-written with Charles Rowe.