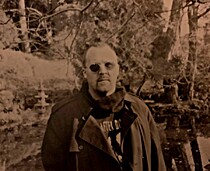 Über michI am a writer. I've published roughly 35+ books since 1990. My main literary muse for many decades has been Charles Bukowski, although I've also been influenced by Lawrence Ferlinghetti, Gerald Locklin, William Burroughs, Philip K Dick and a few others.

I've ended up doing a lot of different things in and with my life, which confuses some people while others seem to find it intriguing. I'm often referred to as a polymath, meaning I know a little about a lot and a lot about a little. I guess that's accurate.

Spent too much time in education. I have several degrees in English and Writing (including a terminal degree), but also Engineering with postgrad research and work in computer science, law, physics and a few other things. Taught at a few schools for a decade or so but found I didn't like it. I prefer research, writing and publishing and I don't think I was that great of a professor, something that I think can sadly be said about many. I've moved a lot, last year from Chattanooga to near Gettysburg PA, making it roughly 32+ moves. Married to a great woman, have one cat. Very involved in geopolitics, national defense, counseling, quantum theory, and belong to a few think tanks and am a research scientist with the American Academy of Neurology. My health has gotten extremly bad over the past few years, forcing me to retire prematurely and make a lot of adjustments, so I'm not as active as I always was. You can find out more details, if interested, at my website or on LinkedIn especially. If you want to see a more recent accurate and larger library, my Goodreads site has probably twice as many books and if you like some good vinyl, feel free to check out my collection at Discogs. All of those URLs should be on this site. Cheers!

Über meine BibliothekMy library has grown and become fairly diverse over the years. I've always used a number of basic tags to try to keep track of them, but not nearly as many as some use. Over on my Goodreads site, I have about 35 "libraries," which are frankly more organized and up to date than what I have here, though I hope to resume updating my library here. Diverse interests, open to suggestions.