Does Dante hope for Virgil's salvation?

Does Dante hope for Virgil's salvation?

I was thinking of some of the topics over which I end up spending a lot of time facilitating my students' discussion, and wondering if that sort of discussion might be of interest here?

For example, my students are rather divided on the subject of Virgil's salvation. In your opinion, and from your reading of Dante, is there hope for Virgil to leave Limbo and ascend to paradise? Does Dante hold such a hope (as Poet or as Pilgrim)? What markers in the Commedia make you think so? Is there anything from outside Dante's own works (e.g. Virgil's 'Messianic Eclogue') which might lend support one way or the other?

The clearest marker that Dante did not think Virgil would be released from hell is in Canto 4 of the Inferno, where Dante refers to the Harrowing of Hell. This was thought to be the event that freed the righteous dead like Adam and Eve and Abraham from hell to salvation. By the time Dante got there, they had long since gone to heaven. But Virgil and the other virtuous pagans were still there in Limbo where they always had been. There is no indication that they are going to get out. Throughout the history of Christianity there has been difference of opinion and much speculation on this point, but it seems to me that Dante took the conservative position in this and other doctrinal issues.

On the other hand, it was commonplace enough at the time that Virgil could be depicted (guided by the Sibyl) receiving a vision of the Nativity: 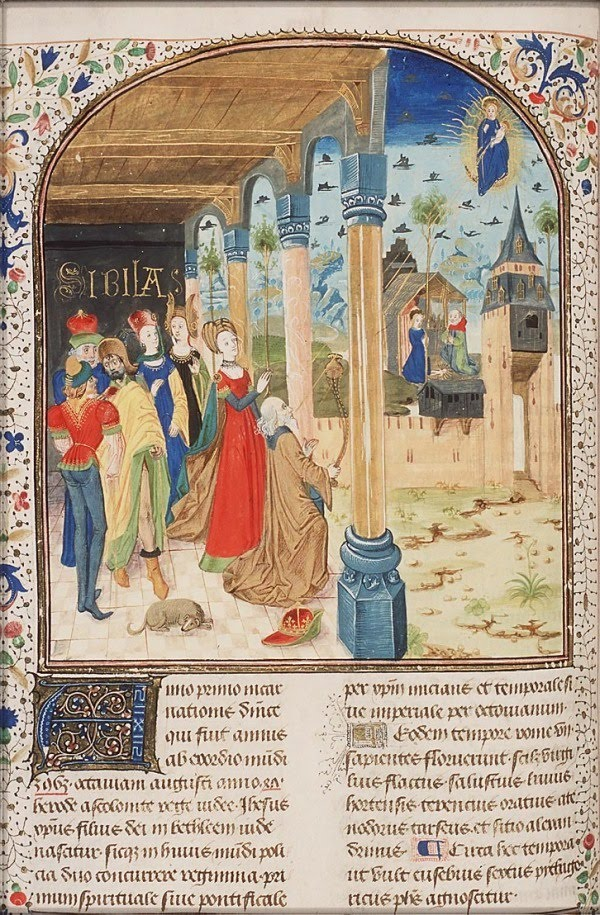 (From a 14th-cen. chronicle; I actually introduce the tradition of Virgil and the Sybilline Oracles when my students read the Fourth Eclogue in its Augustan context; it's usually early on in the spring semester, and so I can usually goad the students to hear the {unintentional} echoes of Isaiah, fresh in their memories from the Advent and Christmas season; I've written more about this on my blog.)

The view of Virgil as prophet was widespread, and it seems to me to have necessarily influenced Dante, but it doesn't seem to have kicked Virgil up to being St. Virgil for him. Also widespread was the notion of Virgil as magician and wonderworker.

Very beautiful illumination; I especially like all the birds. What is the significance of the crown and book in the foreground?

But there are so many tidbits that seem to indicate maybe he can! One, of course is his "messianic eclogue," which was thought to foretell the coming of Christ, and is credited by Statius as having been the thing that enabled his own salvation. Can Dante's idea of divine justice leave in Limbo a man who has brought souls to salvation? Also, there is Beatrice's statements that she prays for him and speaks well of him to god - if one of the blessed, who now know fully the working of divine justice, can hope for Virgil, is it possible that they be disappointed?

I also thing the episodes with Guido da Montefeltro in Inferno and his son in Purgatorio support this; we doubt Guido's story about Francis, because we know Francis cannot have been thwarted. Buonconte's tale confirms this - heaven's will MUST win out, so if Beatrice holds hope, we can't imagine it in vain...?