Shannon Keeps It Simple in 2022 (sturlington)

Shannon Keeps It Simple in 2022 (sturlington)

Hi, everyone. Well, like this roller coaster of a year, my reading was sometimes up and sometimes down in 2021. But I felt I was enjoying my reading most when I was following my desires, reading what I want when I want, and putting down what I was not enjoying.

So for next year, I've decided to just Keep It Simple Silly and not try to set myself a lot of goals, challenges, or categories. My hopes are to read a few books that have been lingering on my shelves, to check out some new books that have caught my attention, and to perhaps revisit older books of authors I want to read in more depth. As always, I'll participate in ScaredyKIT and BingoDOG, but I doubt I'll do any other CATs/KITs with the possible exception of RandomKIT.

Even though I don't have an elaborate setup this year, I hope you'll still join me in my reading journey and maybe catch a book bullet from time to time.

✔January: Haunted Houses - The Good House; The Last House on Needless Street
February: Spiders, Snakes, and Other Creepy Crawlers - Gory Details
March: Switched - Bone China (I think this will work... changelings?
April: Serial Killers - My Heart Is a Chainsaw, The Final Girl Support Group
May: Anthologies, Short Stories, and Novellas - Ring Shout
June: Out in the Wild - Empire of Wild
July: The Living Dead - The Taker (maybe, it's about immortality... I think it could be vampires)
August: Children's/YA - Wilder Girls
September: It's All in Your Head--Or Is It? - Death in Her Hands
October: Witches, Evil Spirits, and Black Magic - The Remaking
November: Stephen King and Family
December: Holiday Horror

SFFKIT
Only if I have something on my list that matches... 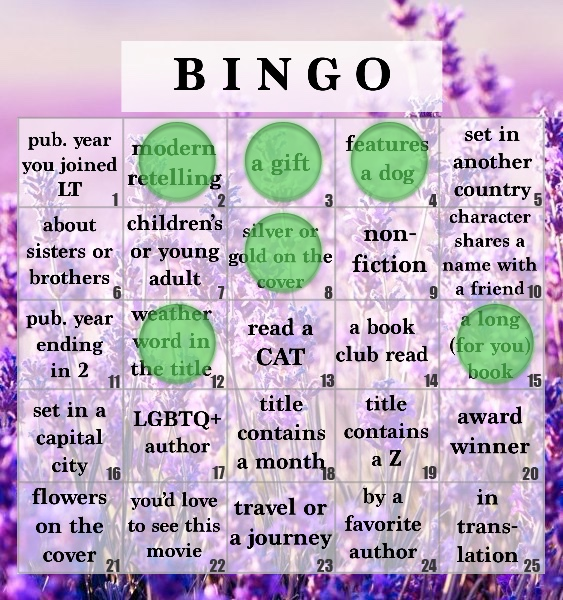 Where in the World Is Shannon?
My goal is to visit 12 different countries this year.

(1) England: The Ocean at the End of the Lane
(2) Australia: Perihelion Summer (also Antarctica)

My goal is to visit 24 different states this year.

(1) Washington: The Good House and The Last House on Needless Street
(2) Colorado: This Thing Between Us (also Illinois-Chicago)
(3) North Carolina: The Hollow Places

Enjoy your 2022 reading, your reading plans make a lot of sense!

You've made a good choice to keep it simple. I look forward to following along. Happy reading.

Happy reading in the New Year.

Wishing you many, many books you like in the new year!

Hope you have a good reading year!

Have a great reading year!

Hello! Wow, everyone gets organized so early! I will do so, but probably closer to the end of the month.

Am admitting to following along on threads for not only people I recognize, but ones that don't look like they'll be quite as busy!! :-)

Looking forward to following your reading in 2022.

Happy new year to all my early visitors! I hope this year brings good things for us all.

My first book of the year was a reread of a short novel:
The Ocean at the End of the Lane by Neil Gaiman (2013)
Read for: SF/F Book Club selection - February | also fits RandomKIT: Home theme & BingoDOG: Gold or silver on cover 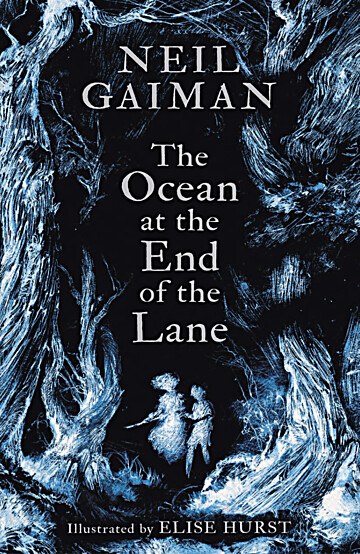 I reread this for a book club, and I liked it much better the second time around, I think because I was reading a beautiful illustrated hardcover edition instead of the Kindle version this time, and also my expectations were adjusted. My original opinion still stands, but Gaiman's writing is so evocative, especially the description of being inside the ocean. I've also come to appreciate short books more as I get older.
--
My original review follows:

When a man returns to his family home, he is caught up by memories of a period in his childhood when his family was threatened by a dark force but saved by the ageless girl who lived down the lane.

Neil Gaiman provides some beautiful imagery in this slight novel. His imagination is unique, and it is a pleasure to fill my mind’s eye with his bizarre creations. However, this is still a very slight novel, with not much of a plot, and it didn’t really satisfy me, like eating cake for dinner. This could almost be a children’s book, except for some brief adult content, and one very frightening scene . To me, though, it reads like a children’s fable, and I was left wanting something more substantial.

Gaiman started out writing this book for his wife and intended it to be a novella. I think it still is a novella, for all intents and purposes, so keep that in mind when shelling out the $10 asking price (at least for the Kindle). Some of the events were drawn from memories of Gaiman’s childhood, . All in all, this is a very childhood-nostalgic book.

The Good House by Tananarive Due (2003)
Read for: ScaredyKIT - January - Haunted Houses | also fits RandomKIT: Home theme and BingoDOG: A long (for you) book

I had been wanting to read this for years, as I had heard so much about how scary it was, and I was happy to find a copy of it in my local bookstore. My feelings after finishing were decidedly mixed, though.

First, this is not a book so much about a haunted house--although the house does play a prominent role--as it is more about demon possession. It is possession filtered through the lens of vodou (voodoo), which I found different and interesting. I used to be fascinated by vodou, and it was good to read a horror book where the author had obviously done her research. However, many elements of the plot confused me, even for a book that was so long and had so much back story. How was the demon (baka) tied to the land, and how did Marie become cursed in the first place? Despite that, I did mostly enjoy the story, and there were many evocative scenes, particularly the ones that took place in the house.

Second, the book is very long (almost 500 pages with very small font) and takes about 150 pages to really get going. It reminded me of 1980s horror, with its small-town setting, lots of crazy things happening, switching between multiple points of view. I used to love those kinds of books, but I felt there was a lot of repetition here, and some scenes could have been cut or whittled down, in my opinion.

And there is a lot going on here--maybe too much. I read a lot of horror, but with (triggers galore) it feels like piling on. The sex scenes especially would throw me out of the story. I hate to say it, but I think Due could have won a Bad Sex in Fiction Award with this one.

I probably would have been fine with all this. Once things got rolling, the book was suspenseful and hard to put down. And then I got to the end. I saw that several other reviewers noted their disappointment with the ending. For me, the ending was completely unbelievable. It simply broke the rules of the world Due had created and felt like a cop-out. There were other endings I would have accepted, and I would have been happy if the book had simply closed on her walking away from the dance with her ancestors, but this... It felt like Due chickened out on everything she had done in the previous 480 pages. I probably would have given this 4 stars if she had just stopped writing 20 pages sooner.

>20 sturlington: Sounds like a book I will avoid. It's funny but the house pictured on the cover looks very much like the haunted house in the book that just disappointed me, Kill Creek. 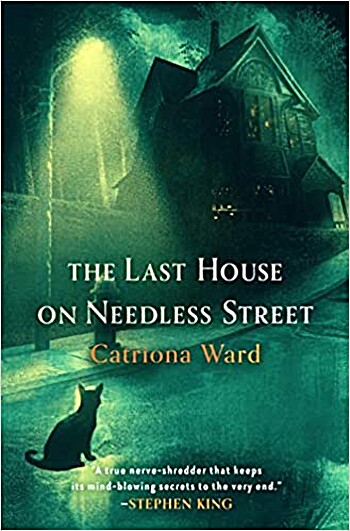 This was an excellent book to mess with your head. I tore through it in two days. I enjoyed the ambiguity of it, the twists and turns, the slow cultivation of empathy for the characters, as well as their different and distinct narrative voices. I also loved the setting of the house--both real and metaphorical--how it changed, was sometimes a comfort and sometimes claustrophobic. There is a mystery, suspense, and a satisfactory resolution. The author handled often-misused horror tropes well and provided compassionate insight into the trauma of abuse.

I realized that I have been tracking every book I have read since 2001, or for 20 years. Wish I had been doing it longer, but still...

I started out using notebooks, now I use librarything.

Update: Here is the first book I tracked--Mr. White's Confession by Robert Clark, finished on January 8, 2001. My review is still on the first page (although I added that in 2012, it looks like). All I really remember about it is it was a mystery set in the 1930s, I think in St. Paul or Minneapolis.

This is a short book in which climate change is greatly accelerated by Earth's near miss with two passing black holes, which adjusts the Earth's orbit so that summers become much hotter. It's an interesting concept that kept me reading; much of the story takes place on a floating fish farm that starts heading to Antarctica with a bunch of refugees once the global warming starts. However, I found all of the characters to be flat and very same-same, distinguished only by their nationalities, and the conflict outside of survival wasn't terribly exciting. The end was also very abrupt and felt like just putting off the inevitable extinction of the species. So this was just okay for me.

>23 sturlington: Wow, that's amazing! And it must be neat to look back and see what you were interested in at the time.

It is kind of fun to look back and see what I was reading and what I was interested in. I was a lot less choosy about books back then. Many of them I don't remember the plot at all.

>23 sturlington: Wished I had done that. I started in 2011, but by then I was over 50 years old and surely can't remember all that I had read.

>29 Tess_W: It was the one New Years resolution I ever made that actually stuck!

I wish I had done it too. It would be interesting to see now what I used to read.

This Thing Between Us by Gus Moreno (2021)
Impulse read found on the library's new books shelf | Also fits: BingoDOG - Features a dog 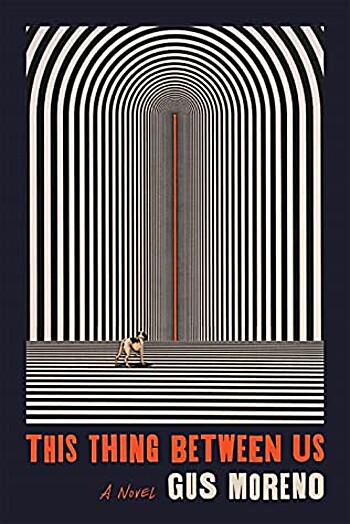 Really imaginative, creepy, suspenseful horror. It's got a bit of everything: ghosts, possession, zombies (people and dogs), rogue technology, creepy woods, folklore, cosmic angst, nightmares, mindfuckery, insanity. And it's short! I could not stop reading it. The ending was... not sure exactly what happened there, but I liked it. I will be watching for more from this author.

I liked this novel much better than Kingfisher's previous novel, The Twisted Ones. For one thing, the story made a lot more sense, the plot is more straightforward (if not all that deep), and she crafts some deliciously creepy imagery in her alternate universe where the willows live. This novel was inspired by the Algernon Blackwood story, "The Willows," but also gives off strong vibes of both Jeff VanderMeer's Southern Reach trilogy and the TV show "Stranger Things." As in The Twisted Ones, there is a cute pet who plays a large role. Kingfisher's flippant, snarky writing style with multiple pop-culture references places this just above the fan fiction she's always referencing in terms of literary merit, but for an entertaining popcorn book, you could do a lot worse.