Atwood News & other notes of interest

Atwood News & other notes of interest

Thanks to tiffin for sending this to me.

Thank you for posting this, avaland!

Congratulations to dear Margaret Atwood who does a fabulous job of defending "the dignity of women" and denouncing "situations of social injustice.” woohoo!!

For any particular reason, citizenkelly? 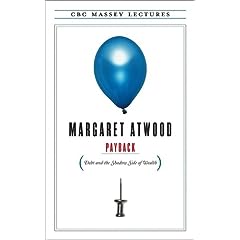 The most prestigious and eagerly anticipated nonfiction series of the year teams up with legendary poet, novelist, and essayist Margaret Atwood to deliver a surprising look at the topic of debt - a timely subject during our current period of economic upheaval, caused by the collapse of a system of interlocking debts. In her wide ranging, entertaining, and imaginative approach to the subject, Atwood proposes that debt is like air - something we take for granted until things go wrong. And then, while gasping for breath, we become very interested in it.

Payback is not a book about practical debt management or high finance, although it does touch upon these subjects. Rather, it is an investigation into the idea of debt as an ancient and central motif in religion, literature, and the structure of human societies. By investigating how debt has informed our thinking from preliterate times to the present day through the stories we tell each other, through our concepts of "balance," "revenge," and "sin," and in the way we form our social relationships, Atwood shows that the idea of what we owe one another - in other words, "debt" - is built into the human imagination and is one of its most dynamic metaphors.

Out this month in Canada, haven't checked anywhere else yet.

Here's a radio discussion with Margaret Atwood on her new book Payback.

Anyone know what month of '09 the new novel is expected?

It appears Amazon and Book Depository, among other sites, list the publication of God's Gardeners by Bloomsbury with ISBN 0747585164 as happening on 7 Sept 2009. Amazon is even taking pre-orders.

I think it was Nickelini who mentioned Margaret Atwood's interview with Bill Moyers on religion. They begin by talking about The Handmaid's Tale.

I love this woman.

There is an article in the Feb issue of Toronto Life on Margaret Atwood with a focus on her Massey Lectures and book, Payback. ( Just got the issue today in the mail)

Missed this one last year. From the Toronto Star:

Canadian author Margaret Atwood has won Spain's Prince of Asturias prize for letters. In a statement yesterday, the jury praised the 68-year-old for work that covers several genres "with sharpness and irony," adding that she "defends the dignity of women and denounces situations of social injustice."

BBC Radio 7 has been doing a serialized reading (5 episodes of 30 minutes each) of The Handmaid's Tale. You can catch up on old episodes and listen for free online here.

Nice! I think that there is an event in Toronto to mark the new book at the end of Sept.

The Year of the Flood was longlisted for the Scotiabank Giller Prize today!

article by Atwood in today's Guardian.

Margaret Atwood was awarded the Crystal Award at the 2010 World Economic Forum in Davos, Switzerland. The award is to honour artists who" have made a significant contribution to improving life on Earth." - from the newspaper article.

Margaret Atwood will be speaking with Ian Brown on "Writing in a time of Calamity" on Thursday, March 25, 7 pm at the Toronto Public Library,789 Yonge Street. The event is free- but seats are first-come first-served basis.

If you haven't already discovered this, Margaret Atwood tweets under @margaretatwood

btw, she is a great tweeter.

Play based on The Penelopiad opening in Calagary.

Here's a link to an interesting 36 min interview with Ms. Atwood. I believe it's fairly recent:

She's got a very dry sense of humour, doesn't she!

I love her sense of humor. It comes across in her Twitter tweets also. It cracks me up!

Website of a band named Oryx and Crake. (Margaret Atwood just met them and they gave her a copy of their CD)

Great interview recently in The Guardian:

This might make some Atwood fans smile . . . Atwood's goalie tips:

Not hilariously funny, but I think Atwood was a great sport when Rick Mercer asked her to do this.

Interesting! That book was on my wishlist... reminds me to keep an eye out for it :P

Atwood appears in this trailer for a new documentary called "Bad Writing" that looks like a lot of fun!

Due out from Nan A. Talese (Random House) in October:

At a time when speculative fiction seems less and
less far- fetched, Margaret Atwood lends her
distinctive voice and singular point of view to the
genre in a series of essays that brilliantly illuminate
the essential truths about the modern world.

In Other Worlds: Science Fiction and the Human
Imagination is Margaret Atwood’s account of her relationship with the literary form we have come to know as
science fiction. This relationship has been lifelong, stretching from her days as a child reader in the 1940s through her
time as a graduate student at Harvard, where she explored
the Victorian ancestors of the form, and continuing with
her work as a writer and reviewer. This book brings together
her three heretofore unpublished Ellmann Lectures of
2010—“Flying Rabbits,” which begins with Atwood’s early
rabbit superhero creations and goes on to speculate about
masks, capes, weakling alter egos, and Things with Wings;
“Burning Bushes,” which follows her into Victorian otherlands and beyond; and “Dire Cartographies,” which investigates utopias and dystopias. In Other Worlds also includes
some of Atwood’s key reviews and musings about the form,
including her elucidation of the differences (as she sees
them) between “science fiction” proper and “speculative
fiction,” as well as “sword and sorcery/fantasy” and “slipstream fiction.” For all readers who have loved The
Handmaid’s Tale, Oryx and Crake, and The Year of the
Flood— not to mention Atwood’s 100,000-plus Twitter followers— In Other Worlds is a must

---From the publisher's catalog.

Interview at The Atlantic regarding science fiction, religion, and Blade Runner(?).

A long interview in yesterday's Guardian, mostly about the science-fiction controversy: Margaret Atwood: the road to Ustopia

Has anyone read, or even bought, In Other Worlds?

>36 Nickelini: yes, I have it. I have read the introduction. Why?

Just wondering. Haven't heard anyone talking about it, so I was curious about what people thought.

Margaret Atwood's "Payback" will be shown at the Sundance Film Festival:

Canadian actress and director Sarah Polley will be adapting Alias Grace for a film. The news was announced in the Globe and Mail and the Toronto Star this morning.

Margaret Atwood wrote a piece about The Handmaid's Tale in the Guardian :
here
I don't think she says anything revolutionary in the article, but it's straight from the horse's mouth, and she references her diaries of the time, which is interesting...

Probably everyone knows this, but Atwood's 3rd installment of the trilogy that started with Oryx and Crake will be out in the next few years. She mentions it in an entertaining interview on Q (with the ever-charming Jian Ghomeshi). She's takes up the middle third of episode 13: http://www.cbc.ca/q/video/

The book trailer for MaddAdam (the third in the Oryx & Crake/The Year of the Flood (aka Madd Adam Trilogy) can be found here:
http://www.youtube.com/watch?v=Fw97w49Mi8w

Seeing that trailer got me to finally read The Year of the Flood (which I bought a while back but hadn't read yet) . . . am liking it more than I expected . . . especially the "Hymns of the God's Gardeners" :)

OMG, there's a third book... I think I saw this in her FaceBook feed, though I only glanced at it. I liked both books but not sure I anticipated a third. Well, a new Atwood is always a cause for celebration.

I also had no idea it was a trilogy . . . though they're not set consecutively (Oryx & Crake and The Year of the Flood overlap in time) . . . I was really drawn into The Year of the Flood . . . made me feel I should go back and re-read O&C . . . Atwood is such a powerful writer . . . I've always enjoyed her novels, but seem to be appreciating the writing even more as I get older . . .

Play the game: Who said it? Miley Cyrus or Margaret Atwood. From CBC books.

I just got to see her speak. So smart and funny. She talked about language and words and discussed The Future Library Project which I find fascinating.

>51 DanaJean: Oh, lucky you. She spoke a few years ago about an hour from me and I regret I did not move hell and high water to be there!