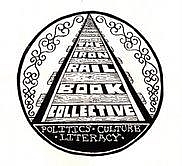 Über michThe Iron Rail is a collectively owned and operated, all-volunteer bookstore, lending library, and community space in New Orleans, Louisiana. Founded in December 2003, we are committed to anarchist, anti-authoritarian, feminist, queer-positive, class-conscious, and anti-racist politics, and to providing alternative literature and information to the people of New Orleans. The Iron Rail is organized in a way that puts theory into practice. We believe in a world without domination and oppression and in working to undermine authoritarian structures of power. As an anarchist collective, the Iron Rail has no bosses or managers.Group decisions are made collectively in weekly meetings, and members are encouraged to be creative in initiating individual projects. The bookstore is operated by volunteers who believe in the importance of establishing alternatives to capitalism, while creating new public spaces and supporting community projects.

Über meine BibliothekOur lending library is one of the largest collectively-run radical libraries in the country. We were also the first library in the city to re-open after Hurricane Katrina, and for several months we were the only functioning library in New Orleans. We have over 7,000 titles on a wide variety of topics. This collection was assembled over the course of 10 years; much of it was inherited from the Crescent Wrench Infoshop, which operated in New Orleans during the 1990s. We are also home to the Above Ground Zine Library, a collection of thousands of rare and hard-to-find zines and small-press/alternative magazines dating back to the 1960s.