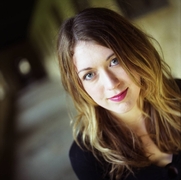 Samantha Shannon is the author of The Bone Season, the first volume in a seven-part series, published this month by Bloomsbury. Samantha graduated from St Anne's College, Oxford this spring.

Do you recall which part of The Bone Season came to you first? Was there a particular moment that inspired the novel?

I was doing an internship at a literary agency in Seven Dials—a junction in London where seven streets meet—when I had the idea. I imagined a girl having the exact same day at work that I was, but she happened to be clairvoyant.

The Bone Season is set in 2059, but in an alternate world which diverged from our own in 1859. I'd love to hear how you set about developing the universe in which the novel takes place, and the sorts of things you had to consider as you did so.

I wanted my clairvoyant society to be a cross-section of historical types of divination, so I did quite a lot of reading about classical and Renaissance impressions of augury, soothsaying and so on. Scion evolved in my mind as a response to the criminal underworld (whereas in the story itself it's vice versa), and I did a lot of thinking about how to create a believable world in which clairvoyance is persecuted, and about what the people of Scion might hear, see, feel and think in their everyday lives.

Tell us a bit about the process of getting your debut book published: what parts have you enjoyed? What's surprised you the most?

I really enjoyed working with my editors. I was pleasantly surprised by how much freedom I was given during the editing process—I was always free to refuse any suggested changes. Another favourite moment was holding the finished hardback.

What parts have you hated, if any?

I haven't hated any part—I know how lucky I am to be in this position—but there's been quite a lot of pressure generated by the "next JK Rowling" tag. Seeing myself compared to an author whose work I love and respect has been very daunting. We don't need another JK Rowling—she's wonderful as she is!

Much of The Bone Season is set in what was once Oxford (where you have, I should note, recently finished your undergraduate career). What was it about Oxford that made it work well as the setting?

Oxford was perfect for The Bone Season. Although it's a modern place in many respects, there are still vestiges of archaism and tradition, and its spectrum of old buildings, from various centuries, give it an eerie sense of being frozen in time.

Who are some of the authors you particularly admire or who've had some influence on your own writing?

Margaret Atwood's novel The Handmaid's Tale was what first got me interested in dystopian and speculative fiction, alongside Orwell and Wyndham. I specialised in Emily Dickinson at university; her poetry inspired many of the themes I want to explore in later Bone Season books.

The Imaginarium Studios have secured the film rights for The Bone Season. Are plans already underway to bring the book to the big screen? Will you be involved with that aspect of the process?

The Imaginarium team are fantastic and have already been asking me for ideas on how I envision a film version of The Bone Season. I was fortunate enough to be offered consultation rights, so I will have some control over the adaptation. While I don't intend to force myself onto every stage of the process, it's great to know that I can be involved, and that the Imaginarium values my input.

What's your own library like? What sorts of books would we find on your shelves?

I have quite a mix of books, but I lean towards sci-fi and fantasy. I have books by Dean Koontz, Isaac Asimov, Margaret Atwood and John Wyndham alongside John Green, Suzanne Collins, Neil Gaiman and JRR Tolkien.

I just finished The Gamal, the debut of Irish novelist Ciarán Collins, which I thoroughly enjoyed. At the moment I'm reading the second book in the Hunger Games trilogy, Catching Fire.

What's next for you now that you've finished at Oxford? Will you be writing full time?

Yes, I'll be working on the second book.

Any teasers you can give us yet about what we can expect in the next volume?