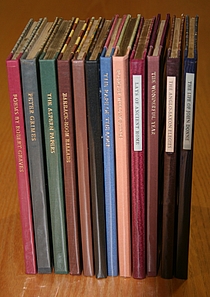 Über michA baby boomer from the late 1960s, I am married with a young daughter.

Über meine BibliothekMy library can be divided into four categories.

Firstly, there is my Folio Society collection which fills the majority of the bookcases in the house. I have over 1000 FS volumes and have started the laborious task of cataloguing them on LT. My FS collection includes publications from 1947 through to the latest publications (I am a long standing FS member - as was my mother before me who joined in the early 1970s - although much of my collection has been purchased on the secondary market). These take up 12 bookcases throughout the house, including the "book wall" in my library, my personal retreat!

And finally there is the loft! As I have run out of space elsewhere, I have countless books in boxes in the loft, with my more valued hardbacks in large plastic airtight containers.

20th June 2013 Update: Having now reached 800 titles, I am about 75% through cataloguing my FS books. I hope to have this completed by the end of July 2013 so that I can then move on to fully catalogue other elements of my library.

31st August Update: Deadline well and truly missed! I still have circa 400+ FS titles to catalogue, and just haven't had the time. My revised target is now the end of 2013.

12th April 2014 Update: Deadline missed again! Not much updated since August, so will now make a concerted effort. Still about 400 Folio Society titles to go.